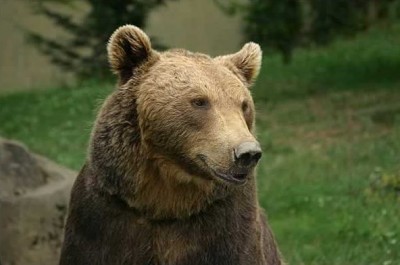 The runner was attacked by a female brown bear that had two cubs nearby.

A woman is recovering from injuries sustained after she was attacked by a brown bear while running near a military base in Anchorage, Alaska on Sunday. The woman was running with her husband, a soldier stationed at the base, but they became separated. Shortly after, she came upon the bear and her two cubs. “They had essentially startled one another,” Maj. Angela Webb told The Associated Press.

“It was very quick, and she didn’t remember much,” Webb continued. The woman asked not to be named, but it was reported that she endured lacerations to her neck, legs, and arms. She walked about two miles on an uphill trail in order to get help following the attack. A driver spotted the woman and took her to the Joint Base Elmendorf-Richardson hospital, and she is now in stable condition at the Alaska Native Medical Center.

The bear was between seven and eight feet tall, according to information shared at a news conference from Base Conservation Law Enforcement Officer Mark Sledge. “The survival instinct for that woman is phenomenal,” Sledge said at the conference, according to Fox News. “The trauma that she went through and the walk out was heroic.”

Image from Bernard-boehne on the Wikimedia Commons