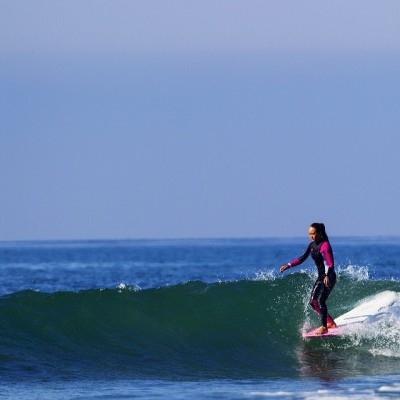 After surfing every day for three years straight, Meg Roh says she has no intention of stopping.

To say Meg Roh has a love for surfing would be an understatement.

The 15-year-old from Southern California has been making headlines lately for surfing 1,000 consecutive days, and that was a few weeks ago. As of June 1, Roh will reach a three-year milestone that is rare among not only teenagers, but the surfing community as a whole. At age 12, this tenacious girl made the commitment to herself to surf every day, rain or shine, for a year. Her supportive parents helped out by driving her either before or after school to the beaches of Orange County to catch at least five waves a day. Since then, she has continued to surf every day and, as she told reporter Pete Thomas in an interview with Grind TV, she has no intention of quitting anytime soon.

“Who knows, maybe I’ll try for four,” she said. “I just love surfing. First of all, it makes me feel good; surfing always makes me happy, so doing this is not hard.”

Though Roh has no hopes of breaking the world record, a streak held by Dale Webster who committed 28 years of his life to the daily surfing challenge, there is still something truly inspiring about the drive this young girl possesses. Most would agree the ability to get up and go surfing regardless of weather, surf conditions, or even personal health is astonishing. Maybe this is why Roh’s story is receiving such attention from the media and local community. Many people in the area quietly show their support by sporting “Meg Would Go” stickers on their cars.

While Roh commits a lot of time to surfing, it has not stopped her from leading a well-rounded, average teenage existence. In fact, Roh has maintained her straight-A average since the beginning of her surfing commitment. She also enjoys other activities, though she admits surfing with friends and in competitions on the San Juan Hills High School team is one of her favorite pastimes.

Not surprisingly, Roh hopes to translate her love of surfing into a career one day. But for now, she is just looking forward to traveling to Nicaragua with her surf team and, of course, getting her driver’s license when she turns 16. “I can’t wait,” she told GrindTV. “And yes, I plan on driving to the beach a bunch.”