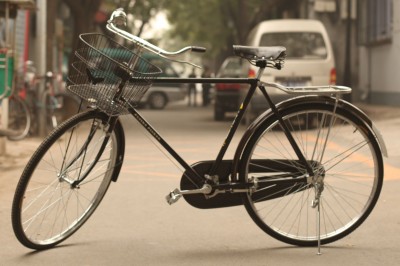 The SFPD has outfitted a number of bait bikes with a GPS, so thieves can be caught immediately.

Bike theft in San Francisco is big business, and the police are cracking down. Many bikes in the city are “bait bikes” that include a GPS, in turn allowing police to catch the thief as soon as they attempt to make off with the prize. The SFPD printed 30,000 bright yellow stickers that read, “Is this a bait bike?” in hopes of decreasing theft.

But the problem that remains is many bikes only have certain parts stolen. If the part of the bike with the GPS remains at the site of the crime, it’s unlikely the stolen parts will be found. Other police departments have used similar tactics in the past, like Boston’s Brookline Police Department, which saw arrests as soon as the program was implemented.

But an article in Grist said the programs may not be as effective as police hope they would be.

“Will the bait bikes actually work? Good question. UW-Madison claims to have cut bike theft by 40 percent the first year it used them. But in Philadelphia Magazine, Christopher Moraff argues that bait bikes entrap opportunistic bike thieves like homeless people, NOT serial bike-nabbers who really need to be shut down.”

Regardless of the yet-unknown results, to help promote the campaign and warn possible bike thieves against stealing, the police department took to Craigslist. The ad, titled “We Have our Bait Bikes Out (San Francisco),” informs people that if they’re caught stealing a bike and attempting to sell it, “Jail is waiting for you and your face will be all over social media.” While the post has already been removed, Grist was able to grab a screenshot, which can be seen below.