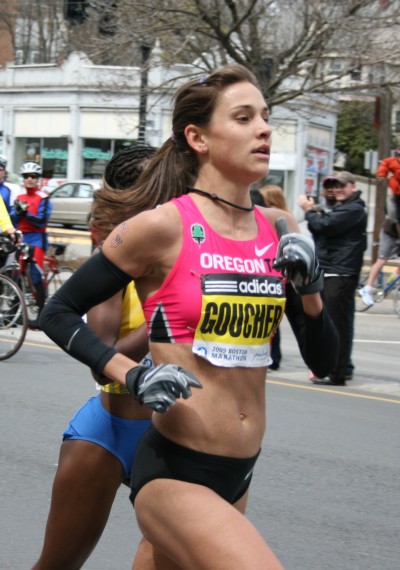 Kara Goucher is a former Nike-sponsored runner who is now signed with Oiselle.

Last week, Nike signed a contract to extend its sponsorship deal with USA Track & Field from 2017, when the current contract expires, through 2040. The deal is estimated to cost Nike between $450 to $500 million, according to ESPN. While Nike and USATF have been partners since 1991, this is the most expensive deal in the history of the partnership. The cost of the deal includes both cash and products, and is a significant increase in comparison to the current deal, which is about $10 million per year. Runners will be required to wear Nike apparel at international competitions, which means their own sponsors will not have advertising space. When the news broke, mixed feelings were expressed by the runners who would be directly affected.

“This new deal is a game-changer for the sport and what USATF will be able to offer all of our constituents,” USATF CEO Max Siegel said in a news release. “In working together with Nike, we placed an emphasis on growth as well as scope, so we can broaden the level and breadth of support for all USATF programs. Nike’s support for USA Track & Field and the sport as a whole is unmatched, and we look forward to this new era of collaboration.”

Runners like Nick Symmonds aren’t quite as thrilled. He said although this long-term agreement gives financial stability to USATF, it leaves the athletes having a harder time searching for sponsors. “We want to see sponsors fighting for the ad space we have on our chests. If Nike has it locked up for 23 years, no one else is really getting the chance to compete,” he said, according to Outside.

But despite the strong partnership that has been existent for years, some runners are looking elsewhere for sponsorship. Kara Goucher recently signed with Oiselle, a women’s running apparel company, after previously being sponsored by Nike. Oiselle CEO Sally Bergesen said she would like to see the USATF seek funding from a number of brands, as well as look into federal funding.

They should be structured in a way that one company doesn’t call the shots,” Bergesen said of USATF, according to Outside. In addition, this extended partnership comes after several controversies at this February’s USA Indoor Track & Field Championships that revolved around Nike-sponsored runners being favored in competition.