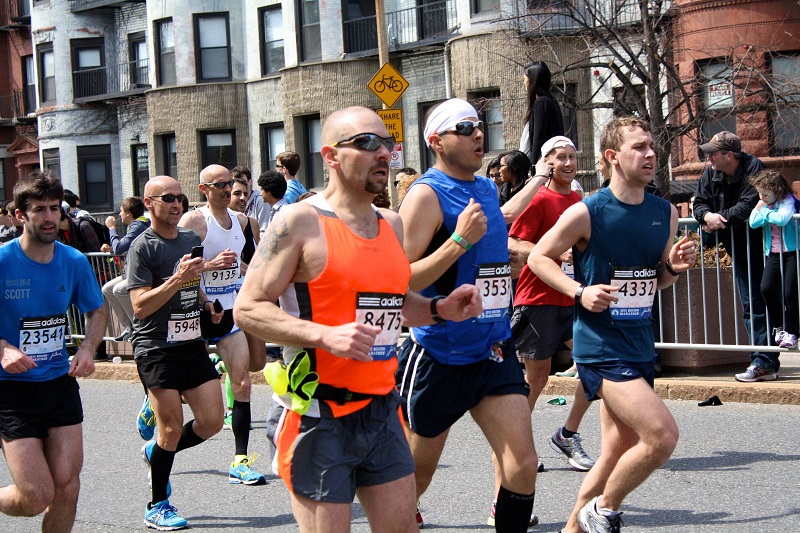 Earlier this morning, all eyes turned to Boston as the 118th edition of the prestigious Boston Marathon began at 8:50 a.m. Throughout the country, emotions ran high as many recounted last year’s event, which filled television screens with images of destruction and devastation. Now, a little over a year later, the city and the nation presented a united front against terrorism as they hosted 36,000 runners, their families, and thousands of fans and supporters. The iconic marathon could not be held on a more appropriate memorial day, Patriot’s Day, with people from all over the country showing support by hoisting “Boston Strong” banners high.

Historically, the Boston marathon has been extremely selective with participants. But this year, the course was opened to an additional 5,600 runners in order to accommodate those who were unable to cross the finish line because of the 2013 attacks. Included in those numbers were an astounding 9,000 elite athletes. The women led the first heat at 9:30, with the men and the first wave of runners following behind them a half-hour later.

The make-up of the amateur runners was as varied as our country. Matthew Mollerus, an 18-year-old freshman at Harvard, was the youngest contestant this year. In sharp contrast, seasoned ultra-marathoner Claude Buisson also took to the Boston streets at the age of 81. Disabled participant numbers rose as well. For the first time, 63 visually-impaired runners and 59 physically impaired runners raced to the finish on Boylston Street.

As one might expect, a number of security changes were made in order to ensure the safety of racers and onlookers. Over 3,500 police officers, who had participated in daylong dress rehearsals for the event, scoured the streets, both in uniform and undercover. The course was also monitored by over 100 video cameras.

For the first time since the race’s inception in 1897, bandits, or unregistered runners who join the race after it begins, were strictly banned. In regards to the security measures, Boston Govenor Deval Patrick addressed the public Sunday on Face the Nation. “Somebody said it may be the safest place in America […] but I will say that we’ve tried to strike a balance between enhanced security and preserving the family feel of this day.”

There has been a plethora of inspiring stories that have surrounded the event this year. Thanks to extensive coverage by all media channels, culminating in the Dream On: Stories from Boston’s Strongest TV special, the stories of survivors and their families were well documented. The Boston Public library also hosted a memorial all week to commemorate last year’s victims.

Though the day has been full of sadness and reflection, as Red Sox hitter David Ortiz told the Washington Post, “There’s going to be happiness around, too, more than sadness because that is the way the city bounced back.”

In a fitting conclusion to today’s race, for the first time since 1983 an American was crowned the winner of the event. Meb Keflezighi crossed the finish line in 2:08:36 to thunderous applause from the record-breaking crowd. For the second year in a row, the women’s division title went to Rita Jeptoo, who finished in 2:18:57, a course record.

This year’s race received full coverage Universal Sports, and could also be streamed via the Boston Marathon website. Full race results are available on the site’s website.