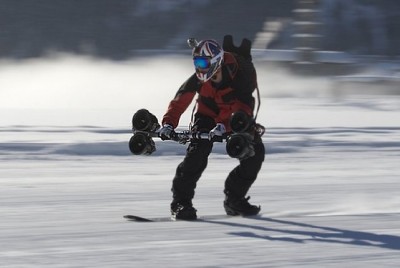 A snowboarder testing out the Thruster.

A new handheld propulsion system developed by DreamScience Propulsion may give snowboarders, surfers, and a number of other athletes another means by which to gain speed. While it’s common for many athletes to be towed, especially during the filming of more extreme sports, the new “Thruster” could provide an easier way to increase speed.

The Thruster features fans that rotate about 30,000 RPM, and can be used with everything from a snowboard to a paraglider. The devices uses a lithium battery for power.

Julian Horsey from GeekyGadgets.com was able to learn more about the Thruster from DreamScience’s founder and director, Adam Contoret.

“The Thruster is a very powerful motor driving a fan, about 30,000 RPM. A modern jet engine has a turbojet propulser module at the core of the engine and this drives a large fan at the front of the engine that generates most of the thrust,” he said. “Electric motor technology has recently progressed to the level where the turbojet core can be replaced with a high-power electric motor. A turbojet core generates massive amounts of heat, so an advantage of a motor core is the cool exhaust air stream making extreme sports applications possible without the danger of getting burned.

“Using our Thrusters is just like using a power kite, but with the advantage of reverse thrust and instant power independent of the wind and weather. And with an output wind speed of over 200 miles per hour—pretty powerful too. You can also use reverse thrust to slow down crash, so you’ve got safety too.”

Check out the video below and visit the DreamScience Propulsion website for more information.