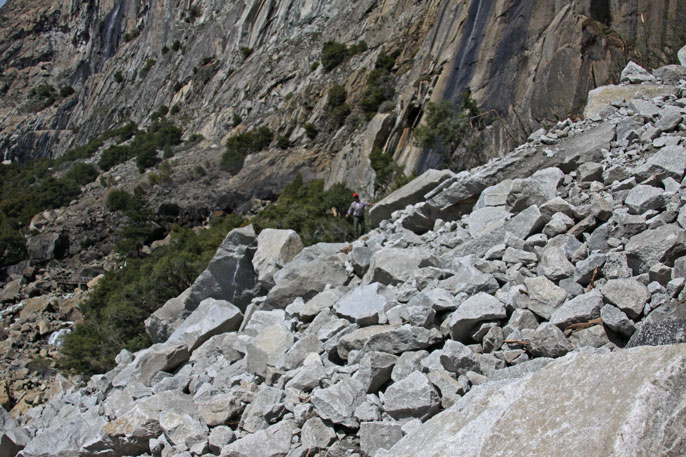 Talus left by recent rockfall. One of the Wapama Falls bridges is visible in the background (far left).

On March 31, a 16,000-ton rockfall closed a hiking trail in the Hetch Hetchy area of Yosemite National Park. On Monday, park officials said the massive amount of rock fell 500 feet, taking down trees and covering a section of Rancheria Falls Trail, which is closed to the public for now.

The rockfall originated from a cliff east of Wapama Falls, and the rock broke into many pieces on the way down. Many of the boulders fell into the water below, and a cloud of dust was formed at the water’s edge. Officials said no one was injured when it occurred, on a Monday afternoon.

Hikers looking to reach Wapama Falls can still do so by starting at O’Shaughnessy Dam.

About 400 feet of Rancheria Falls Trail was demolished and the park is currently working to reopen the trail in the future.