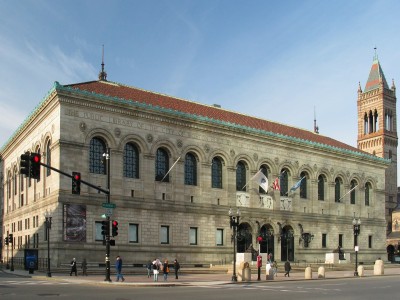 After the horrific bombings at last year’s Boston Marathon, thousands of people contributed to the creation of the Boston Marathon Memorial that took over Copley Square. Items such as running bibs, shirts, posters, photographs, running shoes, and flowers were placed at the memorial.

“Each piece that was left there was a form of communication, human being to human being. The emotion is right there at the surface,” said Boston Public Library Curator Rainey Tisdale of the Boston Marathon Memorial, which was taken down last June. “Perhaps the shoes were the most intense.”

Tisdale said she was deeply moved by the more than 600 running shoes that were donated. Now, the shoes along with other select items from the initial memorial are on display at the Boston Public Library as part of an exhibit she curated, titled “Dear Boston: Messages from the Marathon Memorial.”

In an interview with NPR, Tisdale said, “They’ve got all sorts of wear marks on the soles from each runner’s tread. And there’s all the ways each runner has adapted the shoe so that they would get them through all those miles. They have messages for the people they were running for. Maybe they’re running for a cancer survivor. They have their little tags from their charity team.”

The exhibit will run through May 11.

Listen to the full NPR story.