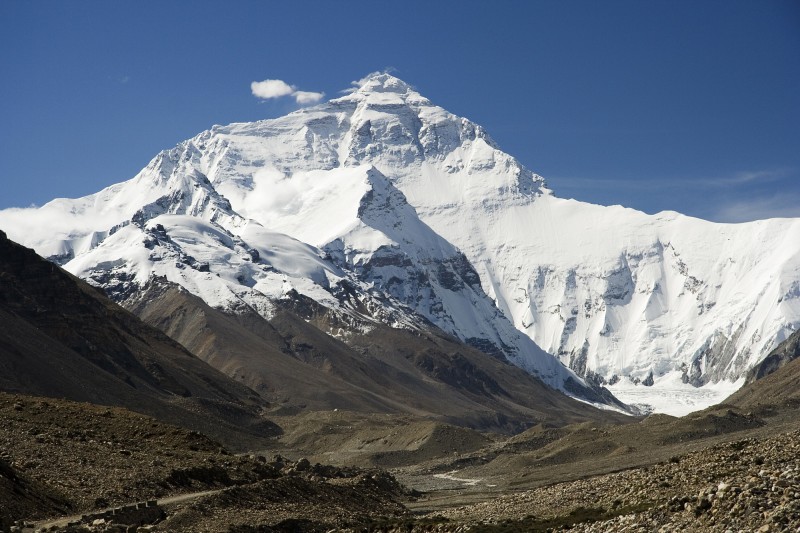 The north face of Mount Everest.

Between the abandoned trash found on routes, the shady deals offered to climbers who want to shell out less cash, and traffic back-up in recent years, climbing Mount Everest has become more of a tourist attraction than a true accomplishment one can cross off their bucket list.

Even Sir Edmund Hillary, who was the first person to reach Mount Everest’s summit with Nepalese Sherpa mountaineer Tenzing Norgay in 1953, said he does not support how the climb has turned into a frenzy of people simply wanting to climb so they can brag about the accomplishment.

“I really haven’t liked the commercialization of mountaineering, particularly of Mount Everest. By paying $65,000, you can be conducted to the summit by a couple of good guides,” he said in a 2003 article. “Clients are spending a large sum of money just to trek up our route, mainly so they can go back home and boast about it. We just wanted to make the first ascent.”

Although Hillary died in 2008 at age 88, there are still plenty of people who are continuing to vocalize his thoughts about the commercialization of the climb.

A blog post on For the Love of the Climb stated, “The pioneers of mountaineering didn’t have guides to help shuttle them up the mountain. They did all the preparation and work, which by many purists’ standards is considered the only way to be a true mountaineer and climber.”

Climbers need to have a certain level of physical fitness to register for the expedition, but more and more, money is playing a factor in the decision of whether or not someone will be allowed to climb.

According to an article published in May by The Washington Post, litter such as empty oxygen canisters and torn tents are left behind on the routes. In addition, climbers contributed to deforestation in areas with trees when they cut down the wood to help stay warm. “They behave as though they are lords of the area,” Hillary said of modern climbers in a BBC article posted 10 years ago.

“And that litter pales in comparison to the greater environmental damage wrought by carbon emissions, which researchers believe have shrunk Mount Everest’s glaciers by 13 percent in the past 50 years and moved the snowline up more than 500 feet,” The Washington Post reported. “That’s a serious problem, since those are the same glaciers that feed the Indus, Ganges, Brahmaputra, Yangtze and Yellow Rivers, which provide drinking water and irrigation in some of the world’s most populous regions.”

What may be even more troublesome than the environmental damage is the safety of the climbers. Although the number of deaths has risen, it makes sense considering the drastic increase in the number of climbers over the years. More so, the entire guiding process seems to have changed.

Questions regarding the safety associated with guiding on Everest was brought up back in 2006 by Outside in 34-page (web) Q&A with a panel of four guides who, together, had reached the summit 17 times. The experts consisted of Neal Biedleman, Guy Cotter, Dave Hahn, and Ed Viesturs.

Cotter said the expeditions offered come in a variety of forms and are led by a number of companies.

“You’ve got a commercially-led expedition, or a commercially-organized expedition, which is one which has a guide perhaps running the expeditions, but all the members are independent climbers,” he said, mentioning these trips are typically in the $40,000 range. “And then you’ve got the bottom level—the bottom-feeders that are out there that are offering the real cheap-o trip, which really has not much to offer at all, and what has really been of concern. I believe, in the last few years is that there’s been some Nepales trekking agencies that have seen that this can really be a cash cow, so what they’re doing is offering trips at the bottom-end, which is services-only, so people get a permit.”

The price of climbing Mount Everest is already considered outrageous, so spending top dollar to receive the most benefits, such as additional food, water, oxygen, better equipment, and possibly having a doctor climbing with the group often seems out of budget. So what’s happening is that these smaller companies are coming in and advertising the guiding as low as possible, which is creating problems with safety. These groups often lack supplies or do not offer the perks (or necessities) of more food or oxygen along the way, leading to difficulties if a crisis situation were to occur.

Hahn made sure to mention one of the biggest positive factors that comes along with more people climbing Everest, which is that the Sherpas who assist the expeditions each year have found steady employment. Check out the National Geographic video below about how the lives of Sherpas changed once climbing Everest became popular.

Check out this additional video about the increasing popularity that has led to traffic back-up on Mount Everest.

Regardless of the popularity or the price, a huge number of people continue to sign up for expeditions.

“Where is Everest’s breaking point in terms of the number of climbers that can be on the mountain at once?” the author of the blog post questioned. “Unfortunately, the answers may only rest in another disaster on the world’s tallest mountain.”

Image from Luca Galuzzi on the Wikimedia Commons