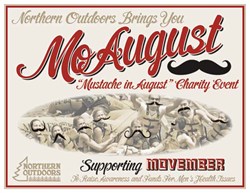 “The MoAugust idea stems from my experiences with close friends & colleagues who have survived serious battles with cancer. The challenge was to see how our company could make the biggest difference by rallying around men’s health, while also just having some fun with our staff, guides, and guests. August is our busiest time of the year here at Northern Outdoors, so we picked this month in order to have the greatest impact in fundraising and awareness of men’s health issues.” – Russell Walters, Owner of Northern Outdoors

How MoAugust works: Participants known as ‘Mo Bros’ and “Mo Sistas”, (think fake mustaches and/or supporters of their men growing ‘staches) will start MoAugust on August 1st, and grow their mustaches out the rest of the month. Northern Outdoors will donate $5 for every MoAugust participant who posts his/her mustache photo on Northern’s Facebook page on or before August 31st, up to a total donation of US$2500, to The Prostate Cancer Foundation. The best mustaches grown/sported during August will win adventure vacation prizes from Northern Outdoors.

The funds raised by MoAugust will support prostate cancer and testicular cancer initiatives. All funds raised will go directly to the Prostate Cancer Foundation. The idea for our summer fundraiser came from Movember, the charity organization that funds men’s health initiatives with a moustache-growing campaign that takes place during the month of November. Our event is not part of Movember, but is inspired by that terrific organization.