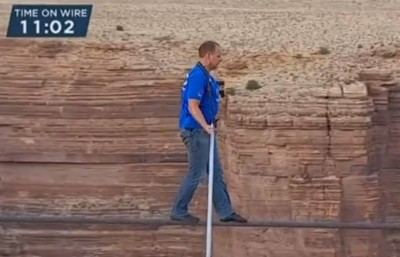 Eleven minutes in, Wallenda continues his tightrope walk across the Grand Canyon.

Seventh generation tightrope walker Nik Wallenda set out to walk across the Grand Canyon Sunday, and he succeeded. Wallenda crossed the 1,400-foot wire in just under 23 minutes as a national audience watched courtesy a live telecast on Discovery Channel.

The only thing between Wallenda and the 1,500-foot drop below him was a two-inch thick steel cable. Wallenda used no tethers, nets, or safety harnesses for this feat, making it a truly death-defying stunt.

The crossing did not go down without a few tense moments however, as the winds created quite a problem for Wallenda. During the broadcast he was heard saying roughly six minutes into the walk that “Winds are way worse than I expected.” Wallenda also had to stop and kneel down after about 13 minutes in an attempt to slow the cable’s movement, telling USA Today reporters afterwards that, “I had to just sit down to get that rhythm out.”

This stunt comes one year after having crossed Niagra Falls, and Wallenda intends to try something even more dangerous next–a tightrope walk between the Empire State and Chrysler buildings in New York.