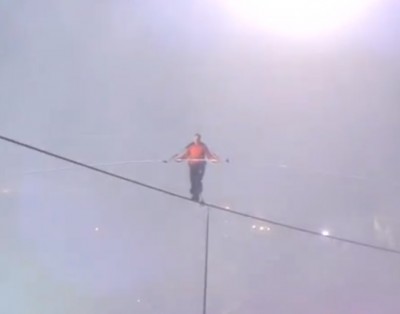 Nik Wallenda walking a tightrope across Niagara Falls for a live ABC broadcast.

Nik Wallenda is taking his life in his own hands June 23 when he performs his highest tightrope walk ever–across the Grand Canyon, without safety devices of any kind.

Wallenda will be crossing the Grand Canyon over the Little Colorado River with a drop of 1,500 feet to look forward to if he falls. He knows what he is in for though, telling GrindTV that, “The stakes don’t get much higher than this. The only thing that stands between me and the bottom of the canyon is a two-inch-thick-wire. I’m looking forward to showing the audience a view of the canyon they’ve never seen before.”

Nik is not the first Wallenda to take to the skies with his tightrope walking, he is actually the seventh generation of tightrope walkers in his family. Wallenda told GrindTV that the draws inspiration from his predecessors–especially his great-grandfather who died during a tightrope walk in Puerto Rico. “I would say I think about him before, during, and after every walk I do,” he said. “He is my inspiration and a big reason behind my success.”

The walk will be broadcast live on Discovery Channel–whom Wallenda signed a contract with in 2012 for near-exclusive broadcast rights to his stunts–on  June 23 at 8 p.m. ET. This will not be his first televised walk however, you can See Wallenda’s walk over Niagara Falls below, which was broadcast live on ABC.

The stakes are high, but Wallenda has the credentials to pull the dangerous stunt off. He currently holds six different Guinness world records for high-wire and acrobatic feats. When asked why he walks tightropes Wallenda answered, “Partly because I want to carry on a legacy. This is my family heritage going back generations. Ultimately, though, it’s my passion. I love what I do, and I wouldn’t want to do anything else.”