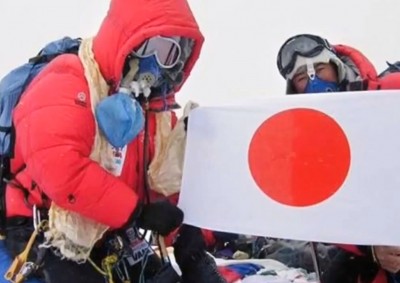 Muira (left) unfurls the Japanese Flag on the summit.

Yuichiro Miura of Japan became the oldest man to reach the top of Mount Everest when he conquered the mountain earlier today at the age of 80. According to the Associated Press, Miura finished off the accomplishment with a triumphant call from the summit to his daughter.

“I made it!” Miura told her. “I never imagined I could make it to the top of Mt. Everest at age 80. This is the world’s best feeling, although I’m totally exhausted. Even at 80, I can still do quite well.”

The octogenarian had made the climb with the aid of his son Gota and an experienced mountaineering team. It was not the first time that Miura had laid eyes on the top of the world. Although he had been familiar with the mountain for years, it wasn’t until Muira was 70 that he made his first summit. He later repeated the feat at the age of 75 and previously held the world record for the oldest person to reach the top of Everest.

“We have arrived at the summit,” Miura told listeners over the radio. “Eighty years and seven months. […] The world’s most incredible mountaineering team had helped me all the way up here.”

The 80-year-old’s most famous attempt on the mountain was perhaps his 6,600-foot ski run in 1970. The attempt ended in a 1,320-foot fall when Muira lost control over steep terrain and began sliding towards a crevasse. With the aid of a parachute, the veteran skier managed to halt his fall just 250 feet from the drop. Although he narrowly survived the attempt, the 1970 expedition did not end without tragedy. Eight climbers succumbed to the perils of Everest during the ascent, which was later documented in the film The Man Who Skied Down Everest.

Now at the age of 80, Muira still keeps himself in rigorous shape. He had long planned another trip to Everest, but it is the challenge he relishes rather than the record of being the oldest climber to reach the top.

“It is to challenge (my) own ultimate limit. It is to honor the great Mother Nature,” Muira wrote on his website.

Muira had previously underwent his fourth heart surgery earlier this year and had been involved in an accident in 2009 that left him with a broken pelvis and thigh bone. Nonetheless, Muira says he is in great physical shape and remains very proud of his achievement. His tenure as the new record holder may not stand for long though, as long-term rival Min Bahadur Sherchan of Nepal is racing to reach the summit by next week. Sherchan is older than Muira by just one year and had previously beat him to the summit by a day during a climb five years ago, claiming the record as his own. The two climbers remain on good terms and Sherchan is expected to congratulate Muira when he returns to base camp.

The first video call made from Everest’s summit also occurred earlier this week, and can be seen here.