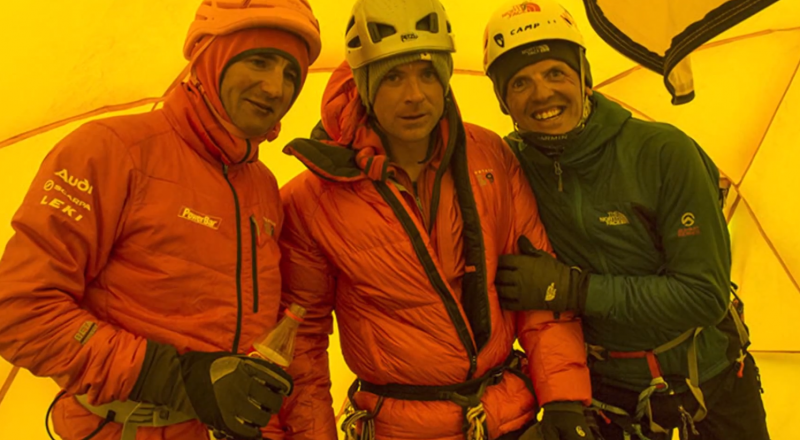 Three climbers faced the fight of their lives at 23,000 feet on Mt. Everest, but it was not from the dangers of the mountain. Rather, the climbers report that a group of nearly 100 Sherpas confronted them, yelling death threats and pelting them with rocks.

According to CNN, the incident involved Italian climber Simone Moro, Swiss citizen Ueli Steck, and Jonathon Griffith of Britain during their expedition. Nepalese authorities are currently investigating the case and say that it is unheard of for climbers to be assaulted by Sherpas.

“If the Sherpas hit the foreign climbers, action will definitely be taken against them,” said mountaineering official Dipendra Poudel.

In the meanwhile the climbers give their own account of the fight, including a press release from Moro’s website. In the release Moro describes a team of experienced Sherpas “fixing” rope to the Lhtotse face as the climbers were ascending to a pre-established tent on April 27. The Sherpa team asked the three climbers not to interfere with their work so Moro’s team moved some distance away. Moro notes that he, Steck, and Griffith were all experienced climbers and properly respectful of the Sherpas, who are highly regarded as among the world’s best mountaineers. Since the first foreign adventurers arrived in the Himalayas, Sherpa guides have led numerous expeditions in hazardous and high altitude environments.

Further up the mountain, the decision was made for Moro’s team to step over the Sherpa’s lines. Four of the Sherpa team were attached to the ice face below while their leader continued to establish lines above. Moro stated that his team did not interfere with the lines themselves or otherwise endanger the Sherpas below. After crossing the lines he noticed that the Sherpas began shouting at the team, and that one started threatening Steck with an ice pick. Later, Moro got into a heated argument with the Sherpa leader and the Sherpas left, proceeding to Camp 2 ahead of Moro’s team.

The Sherpas say that the climbers’ maneuver over their lines put them at jeopardy, as well as dislodging a chunk of ice that injured one of their climbers.

Later, when Moro and his team reached Camp 2 they were confronted by a large group of Sherpas.

“They became instantly aggressive and not only punched and kicked the climbers, but threw many rocks as well,” Moro’s statement read.

Death threats were yelled and Moro was told that that one of the climbers would die that night. A number of other foreign climbers were also present in the camp and some intervened, putting themselves between Moro’s team and the furious crowd. Some reports say that the three men received minor injuries. After 50 minutes the climbers were told that they had one hour to leave the area or they will be killed. Quickly packing only the essentials, the three men made their way down in heavily crevassed terrain with no ropes. In their haste the team made the trip in only a fraction of the time it normally took.

All three men were shaken by the experience and doubted they would finish their expedition. However, CNN reports that both sides reconciled on Monday and the climbers decided to return to the mountain.

Commentary on internet forums and blogs has thrown climbing enthusiasts into a wide debate on whether the climbers or Sherpas were to blame for the incident. Griffith told The Telegraph in an interview that he believes that the incident was caused by increasing tensions between Sherpas and wealthy foreign mountaineers.

“There are luxurious base camps, even at Camp 2 and people are paying an awful lot of money to be here, and they [the Sherpas] are carrying up these huge luxury tents,” said Griffith. “They’re angry at this financial gap on their mountain. These commercial trips are based on a lot of luxury and getting you up the mountain. A lot of these Western clients don’t even know what the names of their Sherpas are. They carry up their sleeping bags and by the time they get there a cup of tea, sleeping bag, and tent are already waiting.”