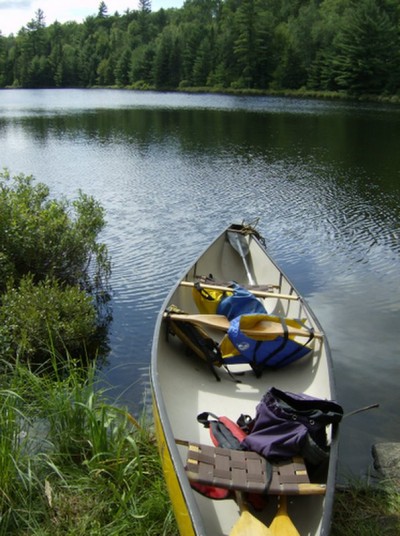 Dean Kell, 75, and Dom Scarillo, 78, planned on a quiet fishing trip in Colorado’s Rist Benson Reservoir, but things took a turn for the worse on Saturday. According to The Reporter-Herald, the two men were sitting in a canoe when a wrong movement tipped the craft over.

Quickly taking charge, Kell told his fishing partner to help him keep the canoe level. Their best chance in the 50 degree waters was to use the overturned canoe as a raft. Both anglers had on flotation devices and were about 50 yards from shore. They decided to hold onto the canoe and row their way back. Unfortunately, the wind stopped their efforts short and they had to consider other options. The canoe’s anchor had dropped and became a major hindrance. Perhaps even worse, Scarillo was becoming delirious and needed to get out of the water fast.

The desperate men were granted a reprieve when Mark Babcock, a resident of the area, rowed out to them in a small paddle boat. Babcock had seen the two earlier and noticed the submerged canoe.

With a good turn comes a bad one. By the time Babcock arrived, Scarillo’s condition had worsened. Babcock and Kell attempted to transfer him to the other boat, but it was too unstable and they didn’t dare another accident.

“He had another one or two minutes,” Babcock said. By this time the two anglers had already been in the water for nearly 45 minutes. They waited anxiously for the Fire Rescue Authority boat, which a friend of Babcock’s had contacted.

Thankfully, it arrived in time and both men recovered from their experiences, although they were treated for hypothermia. Kell and Scarillo thanks the rescue workers and especially Babcock, who they credit with saving their lives.

Experts advise that if you are far from shore when your canoe overturns, try to use it as a raft and swim back to shore. If that is not possible it might be required to right the canoe, with will take considerably more effort. You can read instructions on how to do so here.