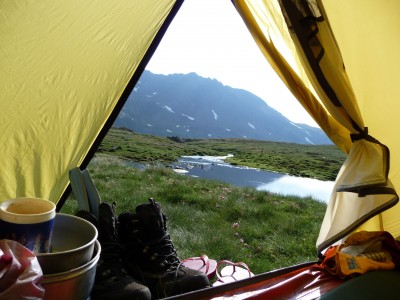 Imagine a tent that has a mind of its own. No, we’re not talking about a computer chip weaved into the frame or a 2001-esque HAL 9000 interface, but the researchers at the Wyss Institute in Harvard University have developed a startling new material. Taking inspiration from nature and our own biology, scientists there have designed an adaptive material that can tune its own transparency and change the structure of its surface. But how will that translate to campers and other outdoorsmen?

According to a press release from Wyss it could mean, “a tent that blocks light on a dry and sunny day, and becomes transparent and water-repellent on a dim, rainy day.”

The material has the ability to automatically attune itself to ambient light levels, which might lead to a number of uses beyond simple comfort. The same technology could be applied to contact lenses or window panes.

Perhaps the most useful application, however, is in relation to the material’s reaction to water. A tent constructed from the material could be adjusted to be breathable with a porous surface, and then adapt into a water resistant cover in case of rain. The material’s “liquid-infused elastic porous surface” is capable of shrugging off most kinds of liquid, including oil and blood. Unlike other materials that switch simply from “water on” and “water off,” the adaptable material has the ability to, “make every droplet of oil or water that is placed on it reversibly start and stop in their tracks.”

“The beauty of this system is that it’s adaptive and multifunctional,” said senior author Joanna Aizenberg. Researchers are already exploring the number of uses the material could be applied to, especially involving oil pipelines and textiles.

You can read more on the findings here.

Image from Steve & Jemma Copley on the flickr Creative Commons