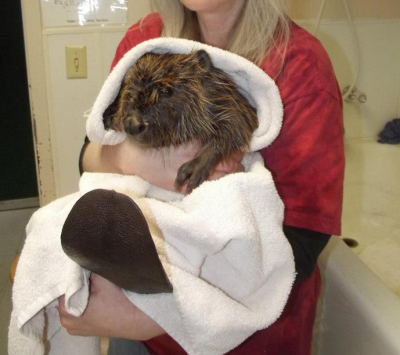 Oil leaks in a pipeline between Salt Lake City, Utah and Burley, Idaho last week put nearby Willard Bay at risk. Over 8,000 gallons of fuel poured out from where the pipeline had burst and rushed towards the important reservoir, until it was stopped by an unlikely source. According to Fox 13, a large beaver dam stopped most of the fuel from entering the bay.

Willard Bay is popular camping site and contains an abundance of crappie, smallmouth bass, and catfish. Contamination of the area could spell an ecological disaster for both wildlife and nearby Great Salt Lake. Thankfully, the spill was mostly contained and crews are working to clean up the last of the diesel. The leak was caused by a sudden increase in pressure inside the 50-year-old pipes. An investigation is underway to see whether Chevron, who oversees the pipeline, will face fees.

Meanwhile, several beavers have been fished out of the oily waters and are being treated nearby at the Northern Utah Wildlife Rehabilitation Center. The beavers arrived slick with oil, but center employees were well prepared. In storage were seven cases of concentrated dish-washing detergent and 10 cases of large paper towels. Donations of food and supplies were also accepted.

After being vigorously cleaned and medicated, the beavers were set inside a few large pens and given a hearty meal. Some of the animals are in serious condition and still being treated while Utah wildlife officers bring in more animals affected by the spill.

Willard Bay campsites have been closed for the time being.