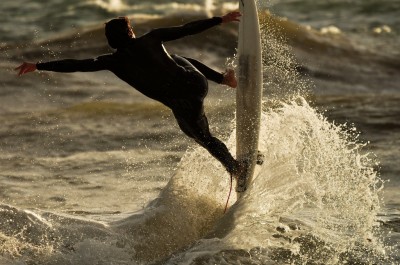 Cape Town, South Africa resident Tony Henri and a friend hit the water on Saturday,  March 16 expecting fun, sunshine, and water. What he experienced was a life-threatening escape.

According to Independent Online, the two friends were surfing about 200 feet out from shore while attending a birthday party at Hawston beach. Henri first saw the shark as a dark shape that began to track him. The surfer managed to yell a warning before the attack came.

“The shark hit the underside of my board and threw me off,” Henri said. “I landed on my back in the water and the shark went over me–its tail hitting my arm.”

Henri abandoned his board, which the shark began biting. As he floated on the water, Henri’s first thought was that his nearby 14-year-old son might witness his father being killed. Then survival instincts kicked in and the surfer began swimming desperately to shore. The distraction his surfboard provided allowed Henri time to reach the sand, where a few alarmed lifeguards waited for him.

“That swim back to the beach was the longest swim I’ve ever done,” he said.

Later, a local managed to retrieve Henri’s surfboard, which was covered with bite marks. Henri intends to keep it as a memento of the encounter, and of how lucky he was.

Surfers are a common target of shark attacks. It is commonly believed the shape of their silhouettes in the water can be mistaken for seals. Sharks will often focus on the board rather than the surfer, but not always. In the event of a shark sighting, surfers are among the first to be notified of the danger. Experts advise that in a potentially lethal struggle with no possibility of escape, to punch the animal in the nose or gills. The nose area of a shark contains its ability to sense electrical fields, and striking that area will disorient the creature. This is of course, the very last resort.