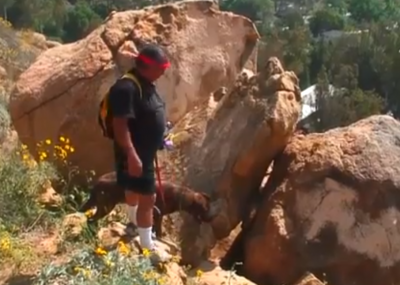 Ramon Llamas treats his dog and constant companion Mole to regular walks around Mount Rubidoux whenever he gets the chance. According to Fox 11, it was on one of these trips that he and Mole discovered a man trapped inside a deep hole.

“He kept on tugging at my pant and whining, pulling me,” described Llamas as Mole began dragging the hiker over to the scene. Mole’s nose had picked up the scent and on a whim, Llamas obliged the dog. They came across an outcrop of rock and the hiker peered down into a pit at the base of the rocks. Eyes stared back at him.

Llamas initially thought a wild animal had fallen in and alerted the authorities. Then he heard a weak voice from the hole asking for water. After some light conversation, the hiker learned that the victim’s name was Paul and he been trapped in the hole for days. The man was dehydrated and in poor condition. While Llamas waited for help, he began lowering water bottles into the hole. The trapped man could give no indication of exactly how long he had been stuck.

Firefighters were able to extract the victim and transport him to a nearby hospital where he is expected to recover. Llamas made a return trip to the site to pick up the man’s shoes and brought them to the hospital.

Mole–who didn’t do much heavy lifting—is enjoying his status as a hero.

“I went for a walk today and everybody stopped me just to pet Mole,” said Llamas. “They don’t care about me, they just care about Mole.” The heroic dog even received a medal from another hiker.

Image screenshot of video by haber paylasımları on youtube