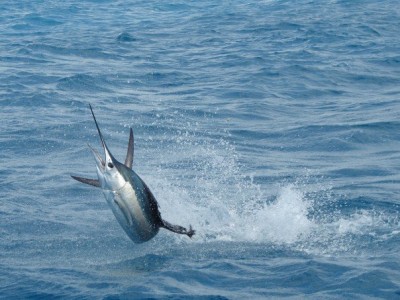 Experimentation and creativity adds an extra dimension to any activity: whether it be fishing, hunting, hiking or even BASE jumping. Extreme Kayak Fishing organizer Joe Hector is known for running tournaments in rough Florida waters amid high winds, so the idea naturally came to him, “what about kite fishing?”

Kite fishing is a fishing method that is said to have originated in ancient China, and is useful for those who want to stay ashore but access deeper waters. Kite fishing from a kayak, Hector says, is becoming popular. According to the Sun Sentinel, Hector’s friend Lance Irvine managed to catch a sailfish even though he and his rod were both knocked out of the kayak.

Irvine was fishing from a Hobie Mirage kayak and using goggle-eyes as bait, an entirely new experience for him. Irvine unlimbered his kite and set it over the water. It wasn’t long before he was able to land a good sized sailfish, whose energetic thrashing managed to unseat him.

“When your first fish from a kayak is a sailfish, it’s like fireworks going off,” Hector said. “This thing was going crazy, jumping everywhere.

Falling in the water was disconcerting, but he was able to keep a grip on both the kayak and his reel. After a few more minutes of struggle, Irvine hopped back in and managed to overpower the fish. It was later released back into the water after some celebrating.

“I think it’s really going to start to catch on,” Hector said. “In my tournaments, I really want people to start getting into it.”

Landing a sailfish certainly beats getting your kite caught in a tree.

Image from Rich Gasparian on the Wikimedia Commons