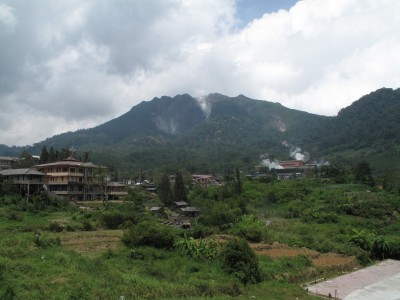 Indonesia’s Mount Sibayak looms over the nearby town of Berastagi. Although its last tantrum happened over a century ago, the dormant volcano is still steaming from vents reaching far into the mountain. Scientists say that volcano is a hotbed of geothermal activity.

That said, Mount Sibayak is not without its beauty. The sleeping giant lures in tourists from all around the world with a lush exterior, easy accessibility and a small yet serene crater lake. For hikers like 39-year-old Kosei Yamada, the mountain is an irresistible climb.

According to the Associated Press, bad weather conditions led Yamada to fall into a ravine and reportedly suffering injuries to his legs. The Japanese tourist was holed up for four days before rescue workers were able to reach the site. A combination of thick fog, darkness and dense trees exacerbated the delay.

A team led by Dianta Bagun was finally able to reach the hiker on Sunday and transport him to a hospital for treatment.