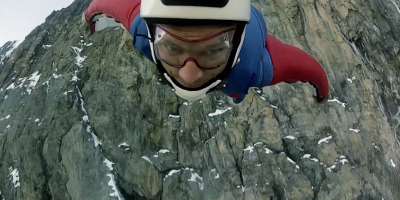 Wingsuits give ordinary–if well-trained and conditioned–humans the extraordinary ability to fly under their own power. The Royal British Legion’s Extreme Human Flight Team took this to new heights as they attempted to fly across the “murderous wall” of the Eiger in the Swiss Alps.

For some perspective, the Eiger is 13,000-foot tall mountain that roughly translates to “ogre” and has a history of dangerous climbing expeditions.

The Extreme Human Flight Team aren’t looking to ascend the mountain however, they’re hoping to go the other way down. They do so in breath-taking fashion:

The jump was made to promote awareness for the Royal British Legion, and perhaps a little bit of glory. Warrant Officer Spencer Hogg flew point for the jump while Sergeant Deane Smith and Major Alastair Macartney acted wingmen.