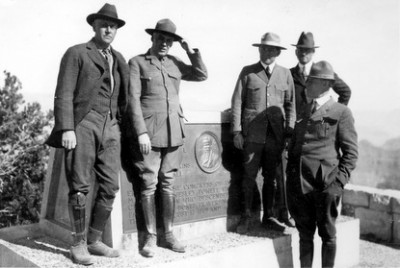 “Protection of this spectacular landscape actually started long before Grand Canyon became a national park,” said Grand Canyon Superintendent Dave Uberuaga. “People started trying to protect the canyon as early as the 1880s; and its first official protection and recognition came in the 1890s when it was set aside as a national forest reserve by President Benjamin Harrison.”

Harrison wasn’t the only President to take an interest in the canyon’s protection. In the early 1900s, after saying of the canyon, “Leave it as it is. You cannot improve on it. The ages have been at work on it and man can only mar it….”, President Theodore Roosevelt proclaimed Grand Canyon a national game preserve. Two years later, after passage of the Antiquities Act, he established it as Grand Canyon National Monument. Arizona achieved statehood four years later in 1912, just five years before Grand Canyon was designated a national park in 1919.

“On February 26, the National Park Service will host the park’s 94th birthday with cake and a small ceremony at the Grand Canyon Visitor Center…,” continued Uberuaga, “…but it might surprise people to know that for years, the U.S. Forest Service hosted Grand Canyon’s birthday celebrations. The Forest Service administered Grand Canyon from the time it became a forest reserve until it became a national park. This place really does have a fascinating and sometimes complicated history.”

Everyone is invited to join in the park’s birthday celebration. A small ceremony will be held at the Grand Canyon Visitor Center on the South Rim of the canyon at 11 a.m. on Tuesday, February 26. Birthday cake will be served immediately afterward. (Cake will also be served at the Verkamp’s Visitor Center in Grand Canyon Village.) Those who plan to attend might want to brush up on their Grand Canyon history, though.

“We’ll have a contest of sorts to test people’s knowledge of the Grand Canyon and its history,” explained Uberuaga. “I wouldn’t be surprised if it got pretty competitive.”

The Grand Canyon is 277 river miles long, averages 10 miles across, and its walls rise almost a mile above the Colorado River. Designated a national park on February 26, 1919, Grand Canyon National Park is now a World Heritage Site, as well. Visitation to the park in 1919 was just under 38,000 and in 2012 was almost 4.5 million. Grand Canyon National Park is one of 22 national park units in the state of Arizona which collectively contribute over $700 million in economic benefits to the state.