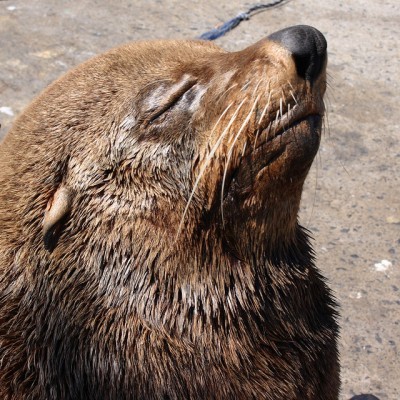 Brown fur seals are noted as large and aggressive animals, but it is surprising for one to catch and devour five sharks in one sitting (or is it swimming?). According to the Daily Mail, a group of divers and shark sightseers watched as an adult seal tore through a group of blue sharks near Cape Point in South Africa.

“It was terrible to watch,” said the owner of the diving tour Chris Fallows. “This was too much for us. We moved about three miles away. We certainly did not want to attract any more sharks to this seal.”

It was the second time Fallows had seen such an event, which is an uncommon departure from the fur seal’s usual diet of smaller fish. In fact, brown fur seals are known to be friendly in interactions with human divers and fishermen. Brown fur seals are also a favorite prey animal for great whites and other large sharks, but at least one seal managed to turn the tables.

“Suddenly a large Cape fur seal arrived and proceeded to catch and kill its first, then second shark,” Fallows said. Two more sharks quickly followed and then a fifth after it had time to digest. Fallow suspects the seal only ate the stomach and livers of the unfortunate sharks because of the short time it spent on each.

We picture the seal to be pretty satisfied with itself.