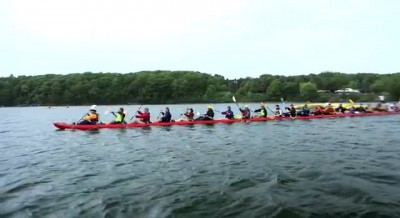 Many a celebration has already commenced for L.L. Bean’s 100 year anniversary. Their attempt to get 100 employees into the world’s longest modular kayak on June 2 in Maine was a success. The company is awaiting a decision by the Guinness Book of World Records committee as to whether their accomplishment will be listed a record. Currently, an official record does not exist for “world’s longest kayak.”

The unique vessel is essentially an elongated Point65 Tequila! modular kayak. The commercially-available kayak breaks down into three segments to allow users to go solo or tandem and to transport the kayak easily. Point65, one of L.L. Bean’s vendors, donated the pieces needed to make this all possible, while an official notary measured the length (500 feet or 152 meters) and oversaw the record attempt.

“What a perfect, fun way to infuse the essence of our 100th Anniversary, as well as our outdoor spirit into this event,” said L.L.Bean’s senior developer for outdoor equipment Scot Balentine in a press release before the event. “The 100 employees that are taking part are very excited to be sharing in this fun and historic moment. To set a new world record would simply put an exclamation point on what will no doubt be an already exhilarating experience.”

The event took place during L.L. Bean’s 31st Annual PaddleSports Weekend. Watch the video below for images and a recap from event participants.