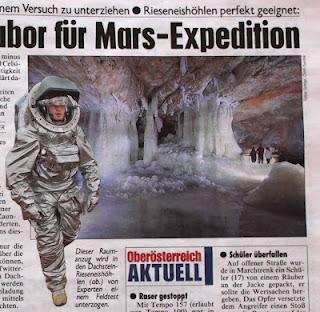 Here’s one for spelunking and space enthusiasts alike. Two caves in Austria and Germany are about to host a field test of Mars exploration equipment. The test will provide valuable insights through testing of space suit technology as well as life sciences equipment. Scientists believe that caves here on Earth are analogous enough to martian caves that simulations like this one can be used to prepare both scientists and astronauts for future missions to Mars. See the full text of the article from Karstworlds.com below.

Between 27 Apr – 01 May 2012, a five day Mars analogue field test will take place at the Mammoth cave and the Giant Ice cave at the Dachstein region in southern Upper Austria coordinated by the Austrian Space Forum.

During this test, the most advanced version of the Aouda.X spacesuit simulator and selected geophysical and life-science related experiments will be conducted.

Martian caves are considered one of the hotspots for astrobiology on the planet. Besides studying contamination vectors during human missions, the Austrian Space Forum is investigating operational issues related to (sub)surface operations in a Mars analog environment.

After preparatory cave tests in lava caves in Mendig/Germany and the Koppenbrueller cave/Austria, we now increase the complexity and fidelity of the tests by including external experiments and expanding the support infrastructure like communication from within the cave to a rudimentary Mission Support Center.

Preparing for a large field mission in February 2013 in Northern Africa, the Dachstein test is primarily meant to be a full systems check-out for the spacesuit simulator Aouda.X in its most recent upgrade, an opportunity for external teams to study equipment behaviour in an operational setting involving the simultaneous usage of different instruments with the option of a human-in-the-loop, a platform for performing ground validations and terrain tests for experiments, including rovers and study concepts of enhancing the situational awareness of remote support teams for planning purposes.

Secondary aims include studying the Dachstein caves as a model region for Martian caves and life under extreme conditions, serving as a platform for media and outreach activities to enhance the visibility of planetary sciences enabling selected students of the Tripolar project to experience field research first handThe caves are settled within the UNESCO world heritage region of the Salzkammergut / Hallstatt in Austria (47°28′32.5″N 13°36′23.2″E), the next major city with airport is Salzburg. The geology of the Dachstein massif is dominated by the so-called Dachstein-Kalk (“Dachstein limestone”), dating from Triassic times. In common with other karstic areas, the Dachstein is permeated by a rich cave system, including some of the largest caves in Austria. The Dachstein is also famous for its fossils, including megalodonts.

The test sites are located at roughly 1600 m in both the dry Mammoth cave and the Ice caves – both can be accessed via cable car and a 10 min walk on paved ways.