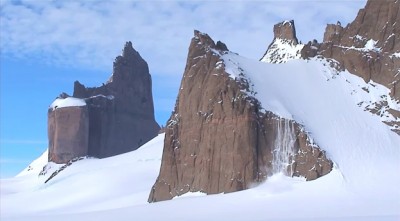 Watch four professional mountaineers from France spend two months in remote Antarctica skiing, BASE jumping, climbing, hiking and camping in freezing temperatures. Sam Beaugey, Manu Pellissier, Sébastien Collomb-Gros and Géraldine Fastnacht each bring their own unique backgrounds to the table: three are experienced BASE jumpers, two are mountain guides and one is a Himalayan climber.

They set off to the Holtanna mountain range in Queen Maud Land to make the first known and documented base jump from a peak seemingly made for BASE jumpers. The trip took place over the course of two months beginning in November 2009, but the film just made it to internet this past week. At 2:30 watch the beginning of the ascent to the jump spot. Skip to 3:10 for the actual jump. The thrill seekers go back for round two at just over eleven minutes in.