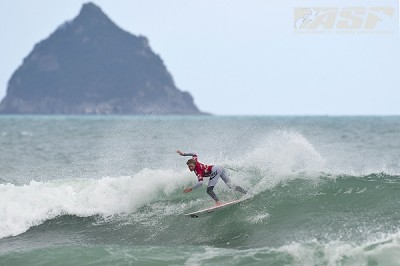 Stop No. 3 of 7 on the 2012 ASP Women’s World Championship Tour, the Dow AgroSciences Pro is pivotal in the chase for the prestigious ASP Women’s World Title and gives the Top 17 female surfers in the world the chance to experience the world-class waves New Zealand has to offer.

Laura Enever (AUS), 20, started her TSB Bank NZ Surf Festival featuring the Dow AgroSciences Pro campaign in excellent form, posting four of the five top wave scores of the day. Enever had a slow start to her opening Round heat, and was sitting in 3rd place until she caught a left-hand runner and unleashed some explosive backhand turns to jump into 1st place and advance directly into Round 3.

“I think I was trying to force things a bit too much at the start,” Enever said. “I caught a couple of waves all the way to the shore and didn’t get much of a score. So I changed my game plan to try to do the biggest turns I could and it paid off. I did two turns and got a 8.60 (out of a possible 10), and after that I got some other big scores. It was great way to finish a heat.”

“Sarah (Mason) has beaten me at this event in the past,” Gilmore said. “And last night I was wondering how Gaby (Sansom) surfed, so I looked her up online and she surfs really well! Luckily there was lots of waves in that heat and I stayed busy and kept my mind off them. It’s pretty tiring having all these events so close together. This morning when I woke up I was praying they would have a lay-day, but the waves were really fun so I’m glad we ran.”

“It was a dream to win back-to-back at Bells last week,” Fitzgibbons said. “Then coming here to New Zealand it’s all about adapting to the beachbreaks. I love surfing here, it’s similar to home. I think all the community support at this event is unreal. It looks like the swell is going to hang around for the week which is exciting.”

“It was a big heat on paper,” Erickson said. “I’m just looking to gain confidence and experience in heats like that by beating those big names. It feel really good to come out on top of that one. It’s funny, even though I’m a regular footer, I feel more confident on my backside. I saw that last year most of the waves here were lefts so I was excited to come to New Zealand for this event. It’s a beautiful place and I’m just trying to absorb it all.”

The TSB Bank NZ Surf Festival featuring the Dow AgroSciences Pro will run from April 11 – 15 and will be webcast LIVE via http://nzsurffestival.co.nz