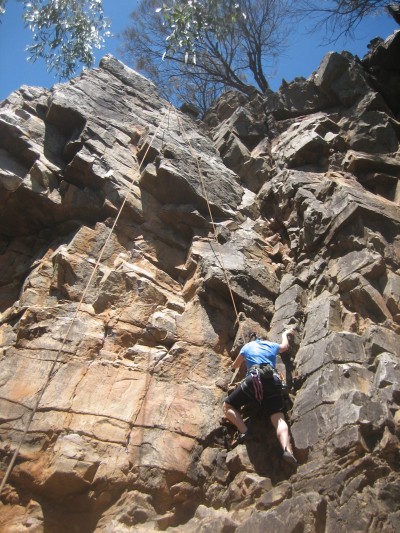 Understanding the differences between climbing ropes can help properly equip you for your next ascent.

The most basic method of categorizing climbing ropes is into the two major groups of dynamic and static ropes. Dynamic ropes are built with a stretching component in mind to help decrease the impact that occurs after a fall. A post on rockclimbing.com asked readers to imagine a 20-foot fall without the element of stretch in a rope, explaining that it could cause serious injuries. Because of this, these ropes are used in lead climbing and are the standard in rock climbing. While these ropes can also be used in rappelling and top-roping, they will wear out much quicker than static ropes. Static ropes, on the other hand, do not stretch. These are made specifically for rappelling, top-roping, and hauling gear. It is extremely dangerous to use these ropes for leading.

There are several sizes of ropes used in climbing. Single ropes typically fall between 9.5 and 11 mm in width and about 50 meters in length (164 feet). It’s important to keep in mind how heavy the load will be as it’s transported by the climber. Another option is twin ropes, which are two of smaller size, approximately 7.6 mm, that are clipped together with equipment. These are ideal for longer routes that are more challenging, sometimes involving ice, because the equipment is easier to carry. Half ropes are two separate ropes, but clipped onto equipment separately. These are thicker than twin ropes, normally about 8.8 mm, and can support the climber in a fall if one were to break. Half ropes are more supportive than twin ropes, so they’re traditionally used in harsher terrains that require more safety precautions.

LIVESTRONG highly suggests climbers check their rope for the International Climbing and Mountaineering logo to ensure it has been tested and approved for safety standards. Abbreviated as UIAA (French), check for these markings on the rope, which may include “CE”–the European measure of safety. At least one of these logos will appear on ropes in the United States as well.

For additional measures of safety, there are many options when it comes to waterproof ropes. These are a great choice if climbers will be in wet environments or are doing ice climbing, as the rope can become covered in ice. The weight of water in an absorbent rope can create quite the load for a climber to carry. The waterproof sealant on ropes does wear off over time, so either check the warranty, have it redone, or invest in replacing the rope when needed. Every rope has a middle mark that gives the climber an idea of how much they can do with what’s left. This is imperative because it tells the climber if they have enough slack to get back to the ground on one rope or not. According to rockclimbing.com, this median mark on the rope tends to wear out over time, so buying a bi-colored rope, also known as a half-and-half, gives a clear distinction where the middle is through bright colors or patterns.

Most importantly, each climber should conduct research on what ropes work best for them through asking experts, online reviews, assessing where they will be climbing, and ensuring every rope has the correct safety logo.

Image from Burtonpe on the Wikimedia Commons