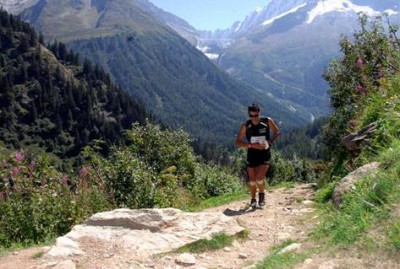 Trail running is a combination of running and hiking over trails, commonly in mountain areas.

The sport of trail running utilizes hiking trails in a combination of running and occasional hiking in challenging terrain that first gained popularity out west in mountain states. Trail running differs from cross country running in that the environment is often characterized by large ascents and descents, commonly covering greater distances. While many people get involved in trail running without competition in mind, trail racing is another option once people gain experience in the outdoor activity.

One of the most important fundamental rules of trail running the runner must understand is that they will not be able to move as quickly as they do while doing basic road running. Speed is something that can be gained over time and it’s more important to become accustomed to the environment and pay attention to future obstacles when first starting out. Also expect to come up short in regard to the distance you normally run on a road or flatter path. Taking your time is essential, as is paying attention to the trail. Depending on where you’re running, the element of nature can work as a considerable distraction, leaving runners staring at the beauty of the environment rather than the challenges the trail may present. This can often end in injuries–keep your eyes on the trail!

Your body will be used to systematic, evenly-timed strides from time spent road running. It’s imperative to let go of this routine and let your legs break the mold by adjusting strides to work around difficulties on the path. For those who are frustrated by their slowed pace, try to focus on the additional workout your body is gaining from the elevation covered as well as the new muscles that are being worked by averting obstacles. When running up steep paths, do not be afraid to take a break and walk. These increases in elevation cause strain not only on muscles not often worked, but test your breathing as well. Even the most experienced trail runners must listen to their bodies and slow their pace when needed. This is helpful in ensuring you will have enough energy to complete the set trail since a consistent pace cannot be followed while trail running because of obstructions in nature.

In addition to curves in the path, rocks, and exposed roots, other challenges include creeks and more runners. Before carelessly stepping into a body of water, no matter how small, make sure you are able to see how deep the water is. Trail runners will frequently come across creeks on their paths. If it’s possible to hurdle the creek, choose this option so as not to come into contact with any water. There is no systematic set of rules to follow when approaching water, but deal with it on a case-by-case basis and exude caution.

Choosing an appropriate type of trail running shoe will be one of the most critical factors in having a successful first workout. These are typically less cushioned, as trail runners often travel on softer ground than paved roads. The shoes have bumpy soles that gain better traction than traditional running shoes. After you have found a pair of shoes that work, make sure to carry water with you. Though it can be in a bottle, small hydration packs give a hands-free option to runners that provide balance and an easier time focusing on the trail. Lastly, make sure you bring a cell phone with GPS capabilities if you either lose your trail or are injured while running.

Image from Pierre Thomas on the Wikimedia Commons