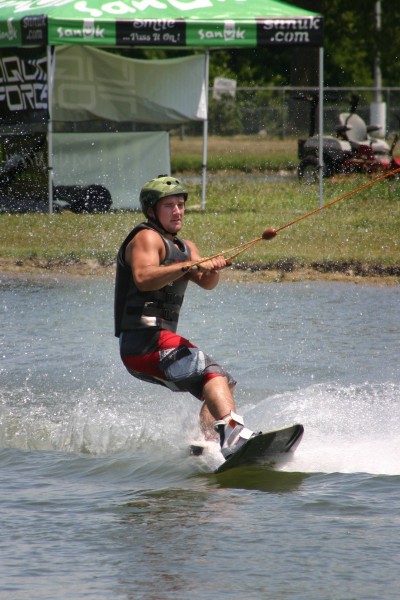 A man in Fairfield, Ohio wakeboards, which is a water sport modeled after snowboarding.

The sport of wakeboarding has gained popularity over the past 20 years since it was first introduced in the United States in the late 1980s. It’s a sport that seamlessly combines the techniques of skiing, surfing, and snowboarding into a common summer activity that is easy to pick up for beginners.

The term “wakeboarding,” which was introduced into the World Games in 2005, was coined by Canadian Paul Fraser, his brother, and a pro snowboarder they were sponsoring at the time. A remanufacturing of the board accompanied by the new term created a buzz around the sport that influenced many to start flocking to their nearest surf shop to purchase wakeboarding gear.

Getting started in this sport is easier than many may assume, and is a good transitional sport for people who already water ski but want to try something new. The basic skill each rider must first master is appropriate body position when on their board. This is best attained when beginning first on dry land before making your way into the water.

You should have sideways footing, perpendicular to the boat, with your upper body moderately contorted so you’re facing the boat. The handle should be held with extended arms and most of your weight should be placed on your back foot. Keeping the knees slightly bent is going to be one of the biggest tools you can use to your advantage, as it helps you gain balance easily.

Getting accustomed to body position is the first step and gaining balance will come with practice. Ensuring that you’re riding correctly will prevent injuries caused by the improper placement of hands or feet.

To properly grip the handle, always ride with your knuckles facing upward. It is normal to wakeboard with your arms extended, but make sure to keep the handle as close to your hips as possible when preparing for and executing a trick. This prevents more intense falls and gives the rider greater control and increased balance when landing after a trick.

When first getting involved in wakeboarding, understanding terms used in the sport can be an imperative factor in the learning process. Two of the most common words used are toeside and heelside, which refer to when the rider is moving toward the wake with their weight on their toes or their weight on their heels, respectively.

If you ride with your left foot forward, this is considered to be a regular stance, while riding with your right foot forward is referred to as goofy-footed.

Most people will find getting up on their board to be the most frustrating part of the learning process. Some of the foremost components to keep in mind are to maintain straight arms, bent knees and let the boat do the grunt work of pulling you out of the water. The board will most likely go underwater, but maintain close proximity between your knees and chest until you’re standing up on the board. Many people try to stand too quickly, but it should feel natural rather than forced to evolve into a standing position.

When you’re ready for more advanced pursuits, it’s also important to know the difference between frontside and backside spins. Frontside spins are when the rider is rotating with their chest toward the boat, while backside spins are when they turn with their back facing the boat. It is suggested that when first learning how to spin, attempt a frontside maneuver, as they are easier to successfully complete.

An expert driver of the boat along with following recommended speeds is the last factor that will lead to a successful first day of wakeboarding. Gradual acceleration is key to getting a beginning rider up on their board, and it’s essential to not reach full speed until the rider seems as though they have gained control and balance. If a rider starts to lose control, cut back on the throttle a little, which will prevent a possibly dangerous fall. Also make sure to slow the speed somewhat when executing turns, as this makes riding easier for a beginner.

Image from Rdikeman on the Wikimedia Commons