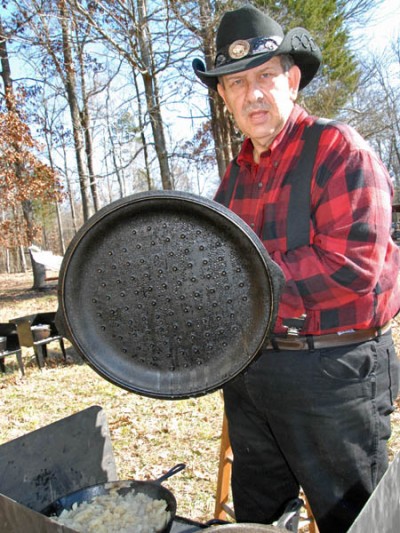 Check out part three of this series on camp cooking with J. Wayne Fears by clicking here.

Another important cooking utensil for the frontiersmen and the chuck wagon cooks of the Old West was a large, cast iron skillet. Besides being great for frying steaks, bacon and ham, they also could be used to fry up potatoes with onions, salt and pepper to provide a hearty, tasty dish that was quickly prepared and easy to cook. The potatoes were often served with a stew, with freshly-killed game or with any type of pork, beef or fowl that the early settlers had. Using a cast-iron skillet, Robert Graves shows us how he prepared a big skillet of potatoes and onions for the Wounded Warriors who attended the Camp OutAmongEm (email [email protected]) hunting and fishing retreat recently held in north Alabama.

Enjoy this video with Robert Graves on cooking over hot coals in a large cast-iron skillet filled with potatoes and onions.