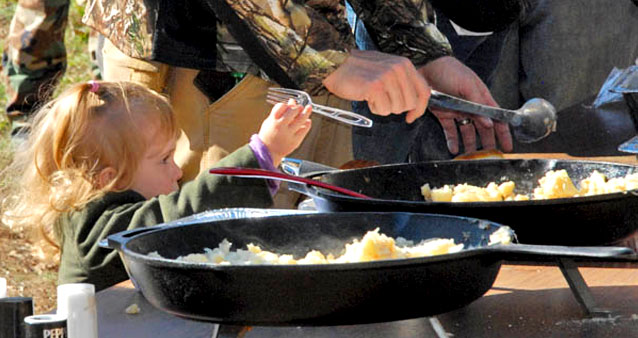 When early settlers started moving from the East to the West, they didn’t have crockpots or electricity, but they did like the flavor of food slow-cooked over an open fire. As soon as they set up camp, the early frontiersmen, cowboys and settlers usually would start a pot of navy beans and country ham (ham that was preserved in salt and smoked to extend the life of the meat for long trips) to cook over a fire. Besides the Dutch oven, most cooks on wagon trains and cattle drives carried cast iron pots that could be suspended over the coals of the open fire. Then the beans and ham could cook, while other chores were being completed around the camp. Dried beans were always an easy-to-carry staple that required no refrigeration. Even though many opted for pinto beans, red beans or black beans, the navy bean became a staple food for the frontiersmen.

In this video, Fears gives the recipe for his navy beans cooked over a fire and shows you how to prepare them.

If you liked this article, check out these articles on Fears’ cowboy cathead biscuits and chuck wagon venison stew. Click here to learn how to cook potatoes and onions in a cast iron skillet.