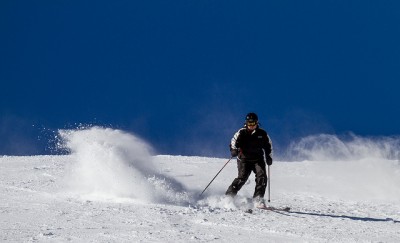 We should be careful about extrapolating from one’s own experience using normal-width skis in soft snow when making ski recommendations for people of substantially different weights. Here’s why:

Let’s assume that there is some validity to the oft-heard claim that mid-80’s skis are the best thing since sliced bread for average weight guys (say, 175 lbs) in soft snow. Then, one can estimate the width of a ski that would give the same amount of float to a skier of a different weight. Here’s a table that does this: Basically, on any sub-70 mm ski currently being sold (because they are all greater than 60 mm), Ms. 120 Pounder will sink in less than Mr. Average Guy on his Rex’s, so its to be expected that a light weight person might not fully appreciate the need for fatties (at least from direct personal experience).

Bottom line – guys, especially big guys, have a valid point in wanting to be on wide skis in soft snow. And, to head off any comments, yes, we have all skied powder in 207 cm long, 64 mm straight sticks from the past, so fatties are not absolutely required, but sure are fun and make marginal snow much easier.

Folks thinking about making their first purchase of a wider than normal ski repeatedly make statements such as, “I expect that this 82 mm wide ski should be ‘good enough’ for foot deep snow”.

The problem with this expectation is that soft snow skiing is a lot like water skiing. Specifically, for a given speed, you and your skis won’t start lifting you up unless the upward force that the snow exerts on your skis exceeds your weight. So, a 200 lb guy going 25 mph may get 150 lbs of upward force from 70 mm wide skis, and his skis won’t lift off of the hardpack base.

Assuming the lift force is proportional to area of the skis, on a pair of 90 mm wide skis (same speed, same angles, etc.), his skis will be generating 192 lbs of upward force and hence, they will still be sitting on the hard base under the soft new snow. However, as soon as he gets on a pair of 95 mm or wider boards, they will generate 203 lbs (or more) of upward force, and his skis will be able to lift off of the base layer and rise through the soft layer.

Thus, this skier will hardly see any change in float from 70 mm to 90 mm wide, then, all of a sudden, at 95 mm, he will start to experience a change in sensation and mode of skiing. This is precisely why many folks (particularly, those over, say 180 lbs) feel that mid-fats are “Jack of all trades, master of none”, and why I object to the statement that mid-width skis are “good enough” for a foot of snow. If they really are “good enough” (ie, wide enough at your weight) to float in a foot of snow, they will float in a meter of snow.

This is also why many folks advocate bypassing the mid-fats and going directly to fats. It is also why lighter weight folks get enough float out of mid-80’s skis and like them. To them, mid-80’s are “fat” skis (at least in their behavior, if not actual width).

Now, obviously, the above description is a simplification. Skiers don’t all travel at precisely one speed, and snow compacts, so new snow just above the hardpacked base will be more dense than snow near the surface, particularly if it has aged for a bit. This means that for real skiers in such snow, the transition from not-floating to floating will not be as abrupt as I described above. It will be more gradual with respect to changes in width, speed, and other variables, so mid-fats will actually float a bit better than 70 mm wide skis, just not as much as most skiers seem to believe.

What Qualifies as Powder? Width really makes skiing possible when we enter the realm of wind buff and breakable crust. If you break through the surface in these conditions, disaster can quickly ensue. A heavy skier, or lighter skier moving fast making high angle turns, is at considerable disadvantage in breakable crust, but can get floatation with a wide enough ski. For me, the magic width in these conditions is over 100 mm at the waist. A frustration for me this past winter was learning my V-Mantras (94 mm) intermittently and unpredictibly broke through the crust; but taking out a pair of Gotamas (110) in the same conditions solved the problem (but left me looking for more stiffness). I can ski light powder on any width ski, but dust on crust, breakable crust, and variable crud really calls out for a tool that can produce a predictable amount of float and stability.

Previously, the discussion centered around the observation that for a skier to rise upwards in a layer of deep soft snow, the skis must produce an upward force (i.e., “lift”) greater than the skier’s weight. Thus, to realize the full benefits of purchasing fatter skis, heavier skiers (say, heavier than 180 lbs) shouldn’t stop in the traditional mid-fat range (mid 70’s – low 80’s), but go all the way to 90+ mm skis.

It recently occurred to me that there is yet another fallacy embodied in the oft-heard statements about not considering any ski wider than a mid-fat, e.g., “82 mm should be good enough for an east coast skier.”

Skiers thinking about buying a pair of fatter skis will often say that since they only see a couple of deep snow days per season, there is no reason for them to go beyond mid-fats. The real problem is that most of these folks make this statement even though they already own a quiver of groomer skis that are perfectly adequate for several inches of new snow, i.e., the usual snowy day in the east. Thus, they really only need a new pair for those rare days when it dumps a foot or more, or for soft, deep spring slop. It almost like these folks think that there is some sort of algorithm that says that for every soft 12” snow day per season you encounter, you are allowed to add a mm to the width of your new skis, but you shouldn’t go beyond this width–or else!

It just doesn’t work like this. If you are in deep soft snow, it doesn’t matter whether this is the only time you will see such conditions this season, or it’s the 40th time. It’s still deep soft snow. Thus, skiers who follow such reasoning and who don’t even bother looking above mid-fat widths when thinking about purchasing a new pair of skis will likely see limited benefits from their new skis in exactly the conditions they bought them for, particularly if the skier is of above average weight. Yes, an 82 mm pair will be somewhat better in soft snow than the 68 mm pair they already own, but the overlap in performance envelopes is greater than it needs to be. In other words, they could do MUCH better than this.

In defense of those skiers who don’t consider skis wider than mid-fats, I do see one valid reason that a 180+ lb guy might use a mid-80’s ski: Namely, that they just never intend to use more than that one pair of skis, at least on any one day.

I would argue that if a skier can bring two or more pairs of skis to the mountain, and has the possibility of selecting the appropriate pair in the morning, or switching skis during the day, their second pair should be 90+ mm skis (at least for skiers > 180 lbs) and forget about the mid-fats. This way, they will get the benefit of fat skis when they need them instead of skiing on a pair of mid-fats that are not particularly good either on the groomers or in the deep.

By the way, when I refer to a fat ski, I don’t mean a specific number of mm. Rather, I mean a width that allows the skier to float given their weight and typical skiing speed. This might be an 75 mm ski for a 120 lb average speed skier or a 150 lb hot-shot, or a 95+ mm ski for a big guy that likes to ski at moderate speeds. This is why I always paired mm with weight in the above post.

Article republished with permission from www.epicski.com.