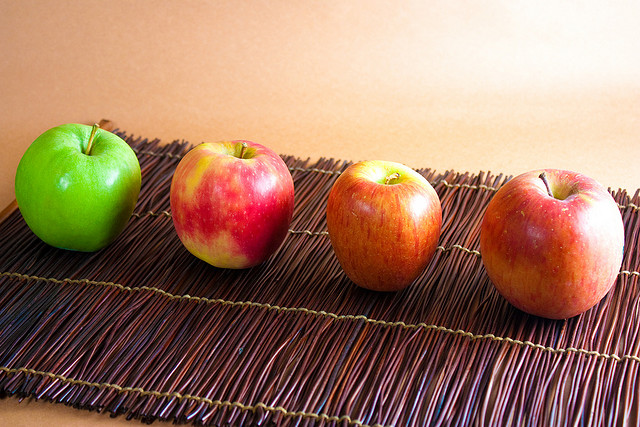 Use the foods that are in season to your freshest and cheapest advantage. Autumn in North America means that apples, blackberries, plums, cranberries, figs, butternut squash, pumpkin, artichokes, oregano, thyme, oysters, pollack, venison, cobnuts and more are accessible and in relatively cheap supply. Hunters can secure their own deer this hunting season as well, meaning there will be plenty of meat to make a variety of dishes.

As apples are the quintessential autumn fruit with which so many varieties of food can be made, here’s a recipe for a morning/evening dish or snack in between meals. You can take this one camping, you’ll just need a frying pan, mixing bowl and preferably a cutting surface.

Decide which apple you wish to cook with. I’ve heard tart and crisp apples like Granny Smith (the most commonly seen green apples in stores) are good to bake and fry with. While some prefer sweeter apples like Criterion, Gala and Red Delicious. Whatever apple you choose, make sure it’s tough and crisp and not tender so it won’t turn to mush in your frying pan.

I like to leave the skin on the apples but some people prefer them peeled. Note that the skin offers more nutritional value than an apple without. Core and slice your apple into either thick (1/2 inch) slices or thinner slices (between 1/4 inch to sliver-sized).

Dip the rings one-by-one generously on both sides in pancake batter of your choice, either from a box or homemade from scratch. Individualize the batter with your choice of almond oil, cinnamon, nutmeg, ginger, brown sugar, vanilla, pumpkin seasoning, etc.

Prepare a frying pan with butter and heat on medium-low. When ready (test by flicking a few drops of water off your fingers into the pan. If the water drops sizzle and evaporate immediately the pan is ready), drop the battered apple rings onto the pan and fry only 3 to 5 minutes (depending on the ring’s thickness) or until the batter turns golden brown. Then flip and fry to golden brown on the other side.

Serve immediately with a topping of honey, maple syrup or jam.

Get a fire going so that you can place a frying pan on or near the flames. *As an alternative you can cook the venison over a charcoal grill from home but it might end up being too dry as a result.*

Prepare a thin-cut 4 ounce steak. Use either butter or oil to coat your pan – only a layer thick enough to cover the bottom so that no part of the pan is without oil, but no more. Lightly roll the venison steaks in flour and throw them on the simmering pan. Fry them on both sides for just a few minutes (4 to 6) then douse the steaks in beer and simmer them until tender.

You can fry up carrots or beans in the same pan or in a second one simultaneously as the venison so your meal will be ready to eat as soon as it cooks.

To add a simple starch into this meal, begin by wrapping potatoes in tinfoil and throw them into the fire just before you begin to prepare your venison and take them out when the meat is done. Alternatively, wrap the venison steaks and some beans in a flour tortilla.