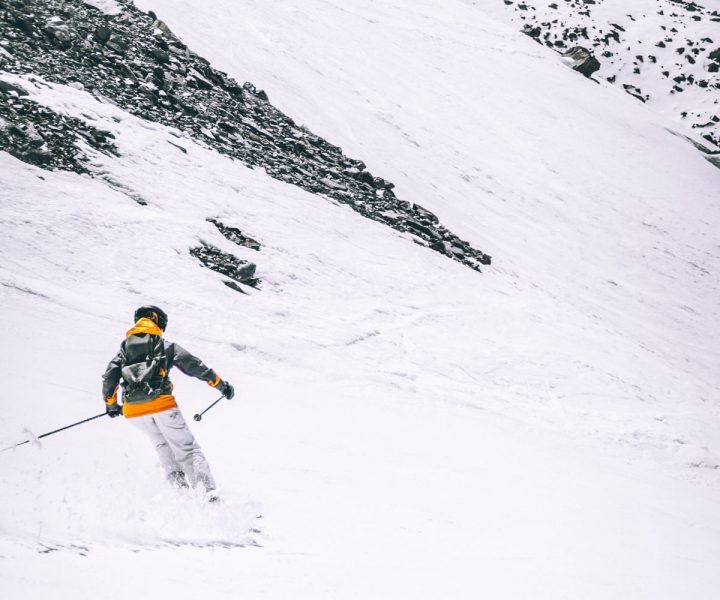 In days gone by, rockers on snow skis didn’t even exist so it would never be something you’d concern yourself with. However, as technologies have advanced, so have skis and this can make the buying process even more complicated. So, what is a rocker and why does it matter to you? That’s the question we’re going to be tackling in this article so that you’ll hopefully bit that bit wiser when it comes to understanding your skis. We’re also going to run through the importance of the camber of a ski and how it can affect your performance on the slopes. 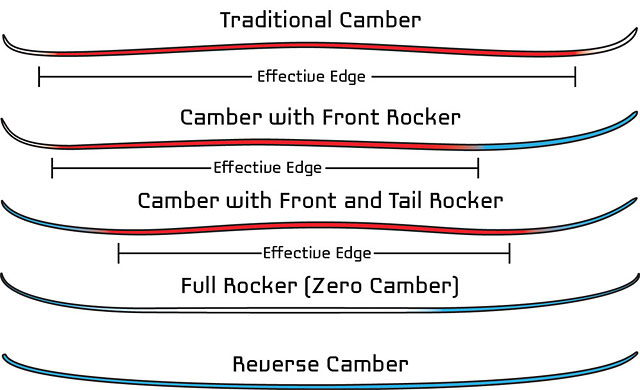 Before rockers came along, we used to focus on how the camber affected a ski’s performance. Cambers on skis have been around for much longer than rockers and it refers to the shape of a traditional ski. If you were to lay a ski or board flat on the ground and look at it from the side, the camber is the upward curve of the middle of the ski when there is no weight on it. This is what gives the ski pop and makes it springy, allowing a more responsive turn, better stability, powerful carving, and overall easier handling. Cambered skis work best on hardened snow or groomed terrain.

You would want to choose a cambered ski if you’re someone who loves to go for it downhill on well-used routes. The camber of the ski means that it will be fighting for contact which can make it feel a bit bumpier but on the right terrain, will provide more grip, allowing you to initiate the turns faster.

The rocker, sometimes known as a reverse camber, was introduced to the market in 2002 in order to create a water ski-like effect of reducing drag and skimming over the surface. It is just as it sounds – a cambered ski but in reverse. That’s to say, rockers look somewhat like an elongated ‘U’ shape, making it much easier to float over soft snow and less likely for you to catch an edge when turning. Laid on a flat surface, the middle of the ski will be touching the surface and the tip and tail will be raised. A rockered ski is usually better suited to wide skis and for powdery conditions.

Just like wakeboarding on glassy waters, a rockered ski will give you that smooth, gliding feel since it brings the tips up to float on top of the snow. On a snowboard, this will make a huge difference if you’re someone who finds themselves face-planting in deep powder a lot.

Maneuverability is greatly increased since the tip and tail of your skis are lifted, reducing the length of contact on your skis. This will make turning feel much easier. Furthermore, a rockered ski is usually much better for park skiing since they are less catchy and you can initiate spins easily as well as better recovery from off-axis landings.

The rocker on a ski can be placed anywhere, depending on the desired effect. They can also be combined with cambered skis to suit different needs. It’s useful to have many different variations of rockers on the market but it can certainly be confusing if you don’t know how it affects the performance of a ski.

For example, a happy medium between rocker and camber would be having the rocker placed at the tip and tail of the skis. In this type of ski, the middle of it has a mild camber and the upturn (or rise) starts close to the bindings. This can either be done symmetrically, so that both the tip and tail have the same amount of rocker, or it can be done asymmetrically.

A ski with a rockered tip and a cambered center can provide a good balance for many skiers and it is growing in popularity. Having your ski designed this way will help you to ‘float’ better on soft snow, make initiating turns easier, and allow you to maintain good balance. Additionally, it can often make a longer ski feel like its maneuvering as a smaller ski would. The downside is that you may feel vibrations in the front of the ski and it won’t have as much grip on harder terrain.

Conversely, it is possible to have skis with the rocker on the tail, rather than the tip. Looking at it from a side plane, the tail of the ski will rise up off the ground closer to the binding. In turn, this reduces the effective edge of the ski and will make the ski feel softer. The benefit of this type of ski is that pivoting becomes easier so does turn releasing in soft snow. However, there will be reduced grip in long turns and an overall loss of energy on the turn. Additionally, the grip will be less on hard snow.

Summing it all up

Although we’ve just talked about the importance of camber and rocker in relation to a ski’s performance, it is important to recognize that these are not the sole factors. There are plenty of variables to take into account when we’re talking about how a ski performs, such as the materials used, ski length and width, stiffness, and flex.

As a whole, camber is beneficial to your skiing performance due to the increased versatility and better control over the edge. In particular, camber significantly helps when you’re skiing at speed and are on icy or hard snow. A camber combined with a tip rocker is one of the most versatile types of skis you can get, allowing you to stay well-balanced and make it easier to plow through snow or variable terrain. The rockered tip allows for easier turning and good floatation, while the cambered mid-section gives you edge control.

What about flat skis? This is when there is no camber or rocker. If you were to lay your ski or board on the ground, the base would have constant contact with the ground when there is no weight on it. This is not so common on skis as it is with snowboards. Generally, flat skis or boards make transitions easier and give you greater grip on the edge than rockered and better maneuverability than cambered.

Now, hopefully you’ll have a better understanding on how the construction of your skis can directly affect the way you move down the slope and that you’ll be that bit wiser when you’re looking at purchasing your next set.