The thick layer of ice that all the ice fishers enjoyed has melted back into the lakes, and the trees have started to sprout to life as the buds begin to pop open. Winter is finally relaxing its grip upon us, and it’s time for a new season.

For many of us, that means getting back outside. Sure, winter has its plethora of fun activities, however the older I get, the more I yearn for the warmer weather and the rebirth of nature.

In my area of New York, there are two events on April 1 that are among the most anticipated events of the spring for outdoors lovers: One is the opening day of trout season; the other is the opening of the Wildlife Drive, especially for nature watchers — myself included.

Trout fishing may get most of the attention throughout the state, but there is an expanding subculture of enthusiasts eager for the opening of this scenic four-mile drive.

Located on the Montezuma National Wildlife Refuge just outside of Seneca Falls, New York, the track meanders through the various pools of the sanctuary. It also runs parallel to the Seneca River and New York State Thruway at times, ending with the statue of a giant Bald Eagle. There is a visitor center at the start that is filled with all kinds of information on local wildlife and staffed with knowledgeable attendants. The purple martin house located next to the center is a sight to see during the spring.

After being cooped up all winter, it is a nice relief to take a ride through the refuge with a camera, especially in the evening, to get some practice getting photographs of all the colorful birds. There are locations along the route that allow you pull off slightly and get out of the car. But for those who want to get closer, especially in the main pool, there is a camouflaged blind with camera lens size openings that one can walk to. 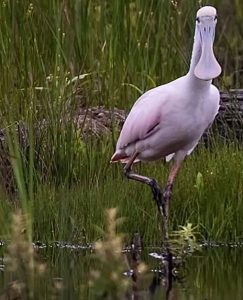 A multitude of various migrating birds rely on the 10,000-acres preserve for nesting, feeding, breeding or just for a rest before continuing their journey. Several common species of birds can be seen such as herons, egrets, geese and mallards, but it seems like every year there is an odd bird or two that make its way to the refuge.

News of the initial sighting creates a whirlwind of excitement as observers flock to the area, armed with cameras, spotting scopes and binoculars. Most recently is has been the appearance of the glossy ibises and roseate spoonbill. Both are a rare occurrences in central New York. 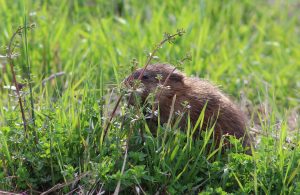 Besides avian species, there are opportunities to watch other wildlife along the drive such as turtles, foxes and the muskrats using their tail to steer them through the marsh as they collect material for their huts.

At times, one can watch thousands of carp as they congregate at the base of the dam that flows underneath Wildlife Drive. They are desperately trying to leave the frigid waters of the Seneca River to access the warmer waters of the refuge to spawn. The carp become easy prey for the great blue herons, and many do not survive. The refuge has also seen an increasing population of our national bird, bald eagles.

Once the Wildlife Drive is open for the season, there are guidelines posted at the entrance to protect the inhabitants of the refuge. Visitors are asked to stay on the paths and not enter the marshes, as this is a federal offense. The drive — open dawn to dusk — is only one way, ending on State Route 89. Turning right on 89 leads to more viewing opportunities, such as an observation tower that allows you to overlook the Tschache Pool and further down is the Montezuma Audubon Center.

When opened, it has become a sign for the community to know that warmer weather and summertime activities are not far behind.