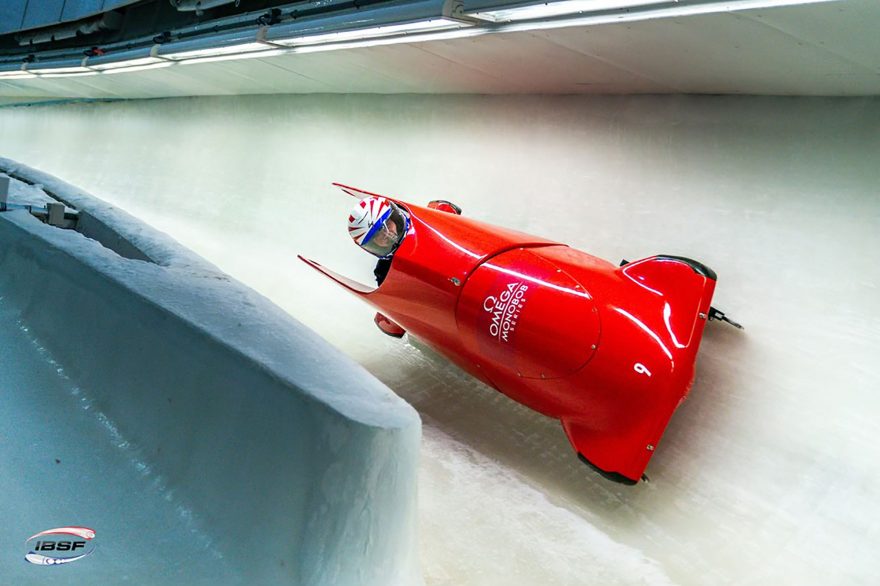 Whenever the Winter Olympics approach, sports fans get stoked to watch some of the most outrageous feats of athleticism known to snow and ice. Perhaps the craziest events we get to see are the sliding sports — bobsled (or “bobsleigh”), skeleton and luge. You might be hard pressed to find someone who’s ever actually tried any of these, and few people know much about sliding beyond what the 1993 film Cool Runnings taught us about the first Jamaican bobsled team.

Will Castillo and Lee Kuxhaus, para bobsled and para skeleton athletes who compete nationally and internationally, shared their experiences about learning how to hurtle down a chute of ice at speeds upward of 60 miles per hour. Castillo and Kuxhaus are both veterans who served in the U.S. Army and Air Force, respectively, and both sustained service-related injuries that resulted in above or below the knee amputations.

Para sliding athletes don’t start their sleds off running at the top of the track, like able-bodied athletes do, said Kuxhaus, who competes in skeleton. Other than that, though, there’s little difference between the two types of competition. No matter how you slice it, you have to be ready to scare yourself a little bit.

“It was thrilling, like a rollercoaster,” said Castillo, a bobsledder, about his first time on the ice. “You’re scared at first, but then you get down and you’re just like, ‘Did I just do that?’ You have to be very brave in the beginning. Even now, I’m not gonna lie, it can be a little scary.”

Kuxhaus, who said her family and friends all think she’s nuts for sliding headfirst down the ice, felt similarly, and said she loves the freedom of a skeleton sled.

“It’s just a rush,” she said. “You’re going down the ice and it’s intimate — it’s just you and the sled and the track, that’s it. Your mind is clear of everything else except a free feeling for around 60 seconds, depending on the track.”

Because there are only two sliding tracks in the United States, in Lake Placid, New York, and in Park City, Utah, it’s not something competitors get to practice every day. Because of that, mental preparation and staying in good physical shape is crucial. Before they ever got in or on a sled, Castillo and Kuxhaus spent a lot of time studying the track and memorizing each turn, so they would know what to expect their first time down.

“The mental training — whether it’s watching point-of-view videos, going through the runs in your mind, memorizing the track, learning the curves in your head — is huge,” Kuxhaus said.

At some point, though, they just had to send it. Once you get going, Castillo said, you have to figure out how to work with gravity’s pressure against your body and your sled as you fly around the curves.

“The thing about bobsledding,” he said, “is that pressure could either pick you up or slow you down. You have to place the bobsled on the right line through the turns. Have you ever stuck your hand out a car window? When you lay it flat, if you point it up or down, the wind pushes it; that’s the sort of pressure we deal with, on a more extreme level. It sounds complicated, but it’s really not.”

As far as steering goes, when you’re moving that fast, a little goes a long way. Castillo said that on some tracks, he steers his bobsled as little as possible. The key is to control the pressure and hit the most efficient line through each curve. If you hit a curve too high, you end up increasing the overall distance your sled travels throughout a race and lose time. If you hit it too low, you can lose a bit of momentum, and thus, speed. A bobsled is steered by pulling on the ends of a rope that’s run through a steering bolt at the front of the sled, which shifts the front frame of the sled back and forth.

Steering a skeleton sled is a bit different.

“The joke is “head, shoulders, knees and toes,” because that’s how we steer the sled,” Kuxhaus said. “Sometimes you do it even with just a look.”

By putting pressure on each corner of the sled with their shoulders and knees, an athlete can control the sled’s direction. And at high speeds, a simple turn of the head or tap of a toe on the ice can keep the sled on track.

Both athletes said runs go by so fast that you barely know what’s happening before it’s over. Your physical and mental reflexes have to be lightning fast.

“By the time you think of fixing something, it’s already happening,” Kuxhaus said. “If something has gone wrong, you have to just move on and think about the next curve.” 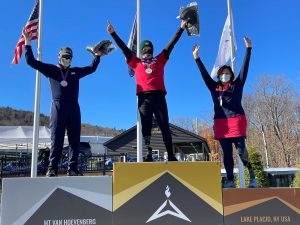 Despite the challenges of the sport, both Castillo and Kuxhaus say learning to slide has been life-changing.

If you happen to find yourself around Lake Placid or Park City during winter, you can buy a ticket for a professional to take you down the track in a bobsled and try it for yourself, if you dare.

Sam Weber is a Philadelphia-based student and former newspaper reporter who believes that writing about skiing is almost as good as actually getting to ski. She loves to explore all types of nature and go camping with her dog, Fergie, whenever possible.