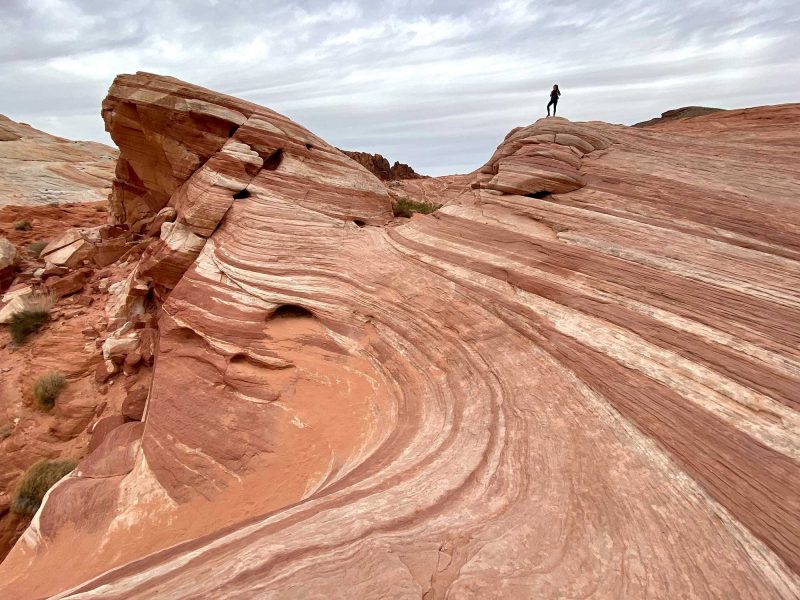 There’s a reason why hikers compare trekking in Nevada’s Valley of Fire State Park to the feeling of stepping foot on Planet Mars. The orange and rust-red colored Aztec sandstone outcrops transport you to what feels like a different planet. And from space — when the sun sets — NASA scientists report that the sandstone appears to be on fire.

With more than 40,000 acres to explore in the park, you can hike through narrow slot canyons, awe at vibrantly colored paths, feel the texture of sandstone and discover unique rock formations — all shaped millions of years ago during the Jurassic Period when dinosaurs still roamed the Earth. Park rangers refer to the area as “An Island of Red Rock in the Desert.”

“The sandstone is the most spectacular rock formation,” said Dr. James Faulds, geologist and director of the Nevada Bureau of Mines and Geology (NBMG). “Sandstone consists of small sand grains held together by natural-forming cement. In this case, that cement solidified ancient sand dunes that were later subjected to uplifting, folding and faulting.” 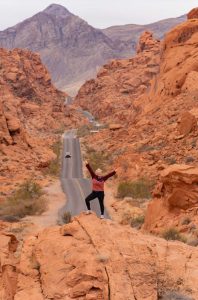 The most amazing thing to Faulds is that the park showcases ancient rock units and huge faults (fractures in rocks of Earth’s crust), but the current landscape is actually shaped by recent erosion associated with the relatively young Colorado River and its tributaries. For example, Faulds explained that the exposures of the sandstone provide a window into a time when the region was covered by a vast desert with huge sand dunes, probably very close to the ocean, around 150 million years ago.

Valley of Fire is Nevada’s oldest state park — officially established in 1935 — and continues to draw geologists, cyclists, hikers and campers alike from across the globe. And it’s less than an hour drive beyond the bright lights of Las Vegas.

When you arrive at the park, you can choose from more than 30 hiking trails. There’s a visitors’ center where you can pick up a park map and chat with park managers. If you prefer a guided hike, there are several local guide companies, like Elite Custom Adventures that includes memorable adventure photos of you and your group.

For an easy to moderate half-day journey (including time to stop and take photos), a good trail combination is the White Domes Trail and Fire Wave Trail that intersect with each other and give you a round trip (loop-style hike) of just over 2.5 miles. On these two trails alone, you’ll come into contact with a variety of geological wonders. 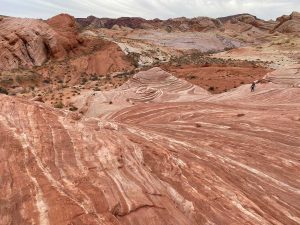 Here are the top five geological wonders I saw during my hike in Valley of Fire State Park:

The Fire Wave is a geological wonder not to be missed. When you first approach the fire wave you see a uniquely shaped rock with a myriad of red, pink and white in a swirl pattern that looks like an ocean wave. This shape is the result of wind and water eroding the sandstone over time.

“Many of the swirling patterns in the rock, referred to as cross beds, actually reflect ‘petrified’ dunes,” Faulds said.

“Ground water later flowed through some of the porous sandstone and locally oxidized it, turning it red in many areas thanks to iron staining,” he said. (Oxidation is a process where a chemical substance changes due to added oxygen.) 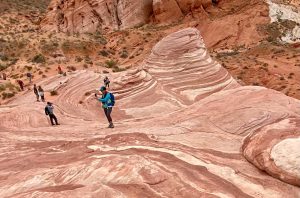 Faulds added that the nearby ridges of limestone represent bodies of older rock that were transported from some distance to the west and thrust over the sandstone along major faults.

“This has created the unusual situation in which older rocks lie on top of younger rocks,” said Faulds. Those stacked rocks are visible far beyond the Fire Wave.

As you continue climbing up the trail up passing the fire wave, you soon see a different view of the iconic swirl. That view is the most common photographic angle seen on social media platforms, magazines and travel blogs. And rightfully so. It’s a photographer’s dream.

For some hikers, navigating through narrow slot canyons while hiking on the White Domes Trail adds a heightened sense of adventure.

Geologists describe these slot canyons as narrow pathways between large rocks formed from water rushing through them. Over time, the water carves and smooths the canyon walls, creating unique textures, shapes and colors in the rock. 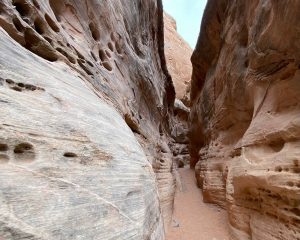 “Over the past several million years (so young geologically speaking), this area has been subject to extensive erosion and canyon cutting thanks to the Colorado River and its tributaries developing and finding a pathway to the sea in the Gulf of California,” said Faulds.

Some of the slot canyons in Valley of Fire are narrow while others present a wider path to walk through. Each slot canyon is unique.

Nearly everywhere you look while hiking in Valley of Fire, you can see some form of Aztec sandstone outcrops. Scientists date Aztec sandstone back to the Jurassic period and report that it’s a geological formation of primarily eolian (or wind blown) sand — sand from which fossil pterosaur tracks have been recovered. Neither birds nor bats, pterosaurs were reptiles, close cousins of dinosaurs.

You can see Aztec sandstone outcrops beyond the park, too. These outcrops appear throughout the Mojave Desert of Arizona, California and other parts of Nevada.

Faulds added that these are some of the best exposures on Earth of ancient sand dunes. Other spectacular exposures of this same rock unit can be found at Red Rock Canyon National Conservation Area west of Las Vegas and Zion National Park in southern Utah.

While hiking in Valley of Fire you can see dramatically etched lines carved into sandstone rock — yet another geological wonder in the park.

Scientists note that these compaction bands form by compression or strain on the sandstone formations by water. When fluids are present, the volume changes may affect the pore pressure of the sandstone — putting stress on the structure. 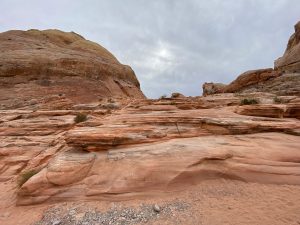 While hiking in the park, you can see layers of these deep lines and cracks in the sandstone.

“These thrust faults were active around 100 million years ago, which marked a period of time when vast mountains covered this region,” said Faulds. “Those mountains were even more impressive than our present-day ranges.” 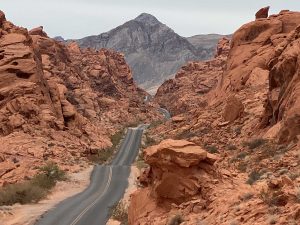 From the iconic view along Mouse Tank Road, you can see these limestone mountains beyond the Aztec sandstone outcrops.