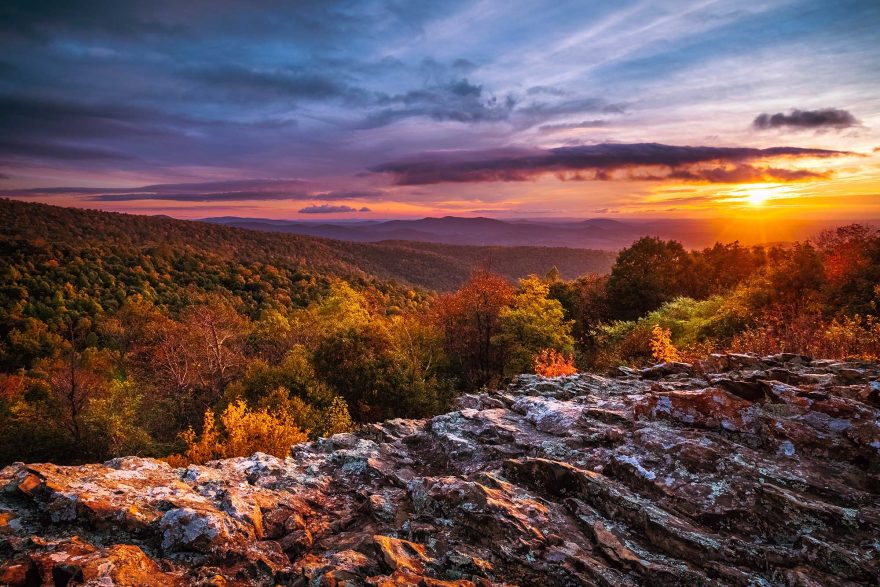 There are a lot of things to love about autumn: just-about-perfect weather, pumpkin-flavored everything, flannel and chunky sweaters, apple cider and, of course, colorful fall foliage. Who can resist those vibrant, multi-hued shades of orange, red, and gold?

It’s hard to imagine a better place to witness one of nature’s most anticipated yearly spectacles than our national parks. Within the parks, Mother Nature is already showing off, but during the fall season, the show is even more impressive. This is especially true in the eastern half of the U.S., where many areas experience four distinct seasons.

Fall Foliage at National Parks in the Eastern U.S. 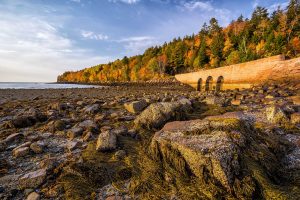 Fall color comes and goes quickly in New England’s only national park. Peak color usually occurs in late September and by mid-October, when most other parks’ fall foliage is just starting to turn, Acadia National Park is putting her winter coat on. If you can plan your visit for September or October, however, you’ll quickly learn why Acadia is one of the best national parks to visit in the fall.

Hiking is a star attraction in Acadia and regardless of your skill or experience level, you’ll want to pencil in Cadillac Mountain. The views from the summit are the best in the park, but there’s another reason Cadillac Mountain should be on your itinerary. From mid-March through mid-September, the summit sees the very first sunrise in all of the U.S.! The hike is 4.4 miles roundtrip, but if you’re not up for the distance in the dark, you can also drive the paved road to the summit.

You should also stop by at least one of Acadia’s numerous historic lighthouses, if for no other reason than to take photos. The juxtaposition during the fall is downright striking, with the lighthouses standing out against the rugged cliffs, crashing waves, and jewel-toned fall leaves. 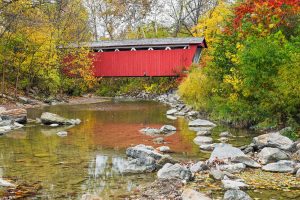 Often referred to as “Ohio’s best kept secret,” Cuyahoga Valley National Park is a nature lovers’ dream. Tucked between Akron and Cleveland in the northeast part of the state, the park has waterfalls, wildlife and, of course, stunning fall foliage come October.

Cuyahoga Valley has more than just beautiful natural scenery. In fact, it’s one of our more unique national parks, with several historic and manmade features. The scenic Everett Covered Bridge is not to be missed, now well over a century old. A ride on the Cuyahoga Valley Scenic Railroad is also a must — after all, how often can you explore a national park from aboard a train?

Another unique way to experience Cuyahoga Valley, especially in the fall, is by hiking or biking the Ohio & Erie Canal Towpath Trail. The trail, which connects Lake Erie and the Ohio River, runs the entire length of the park, showcasing some of the best views and most vibrant fall color. If you’re not a local and need to rent a bicycle, check out the outfitters in Peninsula, the park’s historic town.

Pro tip: To experience the park from two completely different perspectives, consider biking one direction and then taking the CVSR train back the other way! 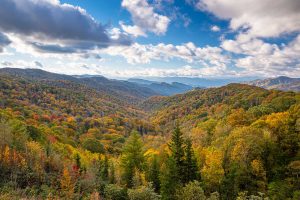 The busiest park in the country is also one of the best national parks in the eastern U.S. for leaf peeping. And when we say busiest park, we mean the busiest park by far — the Great Smokies attracts over 12 million visitors annually, while the number-two most-visited park, Yellowstone, draws just under 4 million!

It’s easy to see why people love visiting Great Smoky Mountains National Park. It’s accessible, just about an hour from Knoxville near the fun resort towns of Gatlinburg and Pigeon Forge, not to mention that it’s one of the only national parks in the U.S. that’s always open to the public for free. The park also offers a little something for everyone, from hiking trails galore and waterfalls to scenic drives and plenty of wildlife (watch for black bears!).

Thanks to the abundance of greenery and expansive rolling hills, the Great Smoky Mountains is by far one of the best national parks to visit in the fall. The park is a stunning display of golden yellow, orange and red during the fall, usually peaking in the second half of October.

Insider tip: The weather in the Smokies is rather mild in autumn, so plan your visit for early November if you want to avoid some of the crowds — the color often sticks around through the first half of the month. 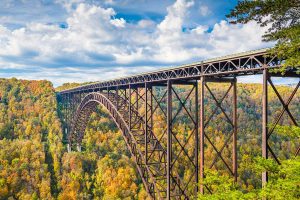 New River Gorge National Park, commonly referred to as simply “The New,” was upgraded from a national scenic river at the end of 2020. The country’s newest park also happens to be one of the best national parks to visit in the fall. It’s stunningly gorgeous, a dramatic section of the Appalachian Mountains in southeastern West Virginia that’s been artfully carved out by the river.

Fall is an ideal time to visit New River Gorge, not just for the gorgeous colors, but also because the weather is near perfect, summer’s pesky biting insects have retreated, and crowds have thinned somewhat. Adventure enthusiasts and outdoorsmen alike will enjoy hiking, climbing, mountain biking, fishing, and some of the best whitewater rafting in the country. Driving through the park offers up its own stunning scenery as well.

Interestingly, New River Gorge is considered a “combo park,” both a national park and a large section of federally preserved hunting land (Another reason to visit this national park in the eastern U.S.? It’s hunting season.) Even more interesting, there are only four other combo parks in the country, all of them in Alaska. 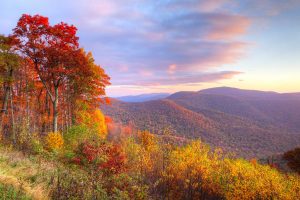 At the risk of really sounding like a broken record, Shenandoah is truly one of the best national parks in the eastern U.S. for fall foliage. There’s not a bad view anywhere in the park, even from the road. In fact, some of Shenandoah’s best views are found along the main road, Skyline Drive.

The road almost perfectly bisects the park, finishing (or starting, depending on which direction you’re traveling) at the spectacular Blue Ridge Parkway. Whether you have a couple of hours or a couple of days to visit Shenandoah, cruising Skyline Drive is an absolute must. There are a few dozen scenic overlooks lining the road, offering up several expansive views of the rich fall colors and, of course, plenty of photo ops.

Another great way to experience Shenandoah’s fall foliage up close is by hiking. The park has dozens of trails ranging from short and sweet to strenuous, all-day treks, and the good news is that there isn’t a single bad choice. For a dose of nostalgia and history, hike a stretch of the famed Appalachian Trail — 101 miles of it run through the park. And if you want yet another way to bask in Shenandoah National Park’s glorious fall scenery, consider joining the Shenandoah Fall Foliage Bike Festival on the third weekend of October.