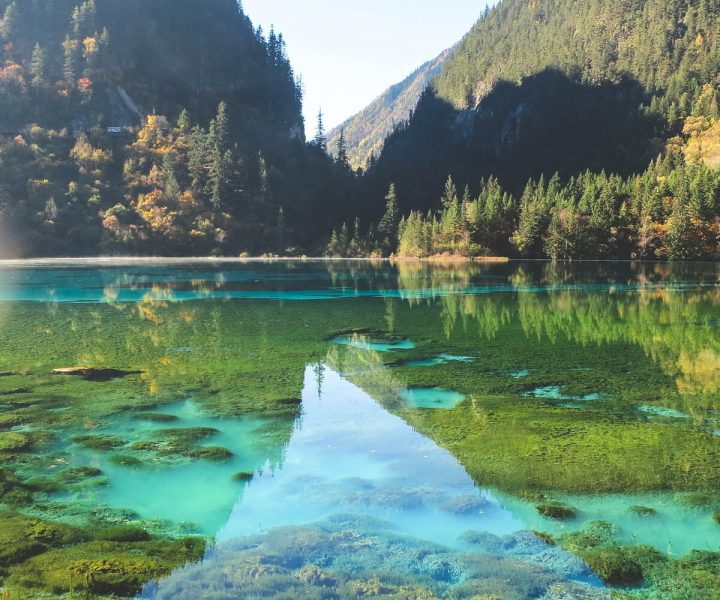 The world around us is brimming with color, and while you may think of vibrant towns when you think of brightly colored locations, mother nature has lots of offerings of her own. From pink lakes to seemingly paint-filled hot springs, there are plenty of statement-making and eye-catching destinations out there.

If you’re on the lookout for some of the most colorful natural wonders around, then keep reading for some Instagram-worthy no-filter-needed locations!

Not where the iconic 80s movie was filmed, but impressive nonetheless. One of the most popular tourist destinations in Iceland (for a reason), you should definitely add the Blue Lagoon to your bucket list. Take a relaxing and seemingly curative dip in its deceptively toasty ice blue waters, and thank us later.

THE RIVER OF THE FIVE COLOURS This is a place like nowhere else on #Earth and YES it is in #Colombia The colours of the “#rainbow #river” comes from algae or moss which gives a shades of red, blue, yellow, orange and green❤ It can only be seen from June to November and has a cap of 200 people per day to protect the area✔. ____________ We support #responsibletravel and we encourage you to do the same! We can discover and protect the world at the same time! BE part of #responsible #travel #experiences‍♀‍♂. ____________ Credit to @mysimple_travel

Its kaleidoscopic riverbed makes Caño Cristales one of the most beautiful rivers in the world, as you can find a gamut of shades ranging from blood red to sunshine yellow. To experience the colors at their most technicolor, head there between June and November. The only downside is that the experience won’t come cheap, as the access is limited and monopolized.

This volcano is unique for a single reason – it’s a volcano with blue lava. Though we should clarify that the lava itself is not azure blue as many people claim. Instead, the color happens due to uncommonly high levels of toxic sulphuric gas being simultaneously combusted and released.

Vinicunca (or Rainbow Mountain as its commonly called) is a recent discovery for travelers, so head there fast before it’s taken over by tourists. There are some fantastic hiking opportunities amongst vibrant colored hues, and there are not many opportunities to have a photo against a backdrop that’s so picture-perfect.

You may have never heard of Las Coloradas before, as it had remained off of traveler’s radars due to its challenging accessibility, but the secret is out. Unfortunately, though you are now aware of the rosy waters, you can only see them and not bathe in them, as the access has now been limited to just an eye-candy experience.

Discover this pink river at Western Australia Check out GenieTraveler.com for an Exclusive Members only FREE Trial Christmas Special and 35% Off FOR LIFE with code XMAS35 and save massive amounts on your next trip. Follow @GenieTraveler . . . @twmbeautiful

Desperate to take a dip in rosy waters? Then head to Australia, where Lake Hillier awaits. Though tricky to reach, as it can only be accessed by helicopter, you can reward yourself with a swim in its fuschia waters once you get there.

A post shared by International Traveller (@internationaltraveller) on Mar 10, 2015 at 11:21pm PDT

Wuha Lake or Five Flower Lake regularly ranks as one of the most spectacular bodies of water on earth. Legend has it, the lake was created when a goddess dropped a shard of broken mirror. Whether you believe the myth or not, the turquoise, dazzling, crystalline water is well worth a visit to see if you can actually look at your reflection.

The Danakil Depression in the Afar region of northern Ethiopia . The Depression is the hottest place on earth, according to average yearly temperatures. It also has one of the lowest altitudes on land at about 125m below sea level. The local Afar people collect salt from the salt flats to make a living. It’s currently a conflict area, but many do travel there to experience its ‘other-worldly’ landscapes via special tours. @traxroundtheworld #danakildepression

This destination is not for those ill-disposed to heat, as the Danakil Depression in Ethiopia is nestled amongst an inhospitable desert region. However, if you can take the heat (literally), the salt deposits ranging from amber to crimson in color is a jaw-dropping sight to behold.

Chamarel may be the only place in the world where you can experience an actual rainbow in corporeal form. The dunes are made up of an incredible range of hues, from toasty tangerine to dusky mauve. The attraction is ever-changing, though uneroded for some unexplained reason, despite the constant heavy rain.