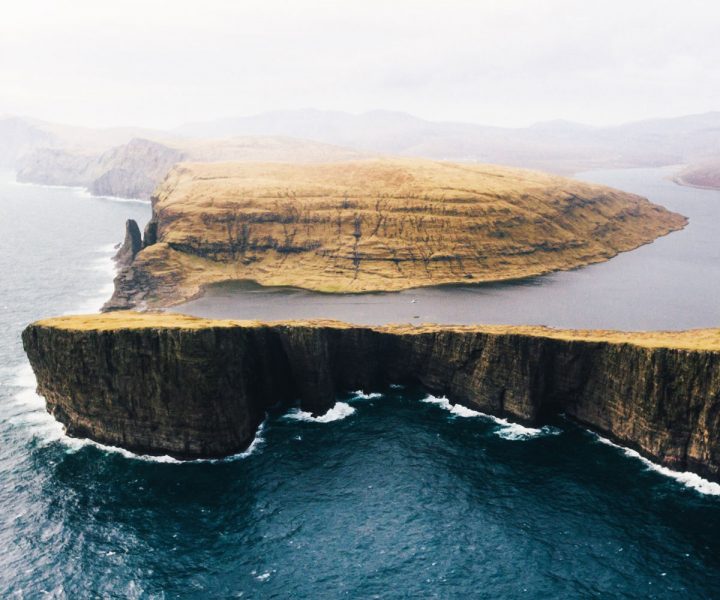 The Faroe Islands are located in the North Atlantic Ocean, just off the north tip of Scotland and south of Iceland. Meaning ‘sheep islands’, the mountainous landscapes offer unrivaled views of dramatic coastlines, undeniably beautiful waterfalls, and rugged terrains.

If you wouldn’t have been able to place the Faroe Islands on a map, you could be forgiven. The total land mass of all 18 islands belonging to the Faroe Islands is roughly 6,500 times smaller than that of the US and the population is 28,000 times smaller than China’s. So, it would be unsurprising if you haven’t even heard of it. However, the views on offer there are causing quite the storm. Here’s what’s waiting for you on these magical islands…

Mulafossur, located on the west side of Vágar, is a waterfall that belongs in fairy tales. Sometimes known as Gásadalur waterfall after the town it is situated next to, the fall drops from a dramatic cliff into the ocean. Legend has it that small dwarves can be found around the waterfall which are there to keep a look out for the unexpected, which is often rough weather. On a particularly gusty day, it is not uncommon to see the water actually rising here back up the cliff due to the strong wind force. Gásadalur villiage, which has a population of about 18 people, is only a 20-minute drive from Vágar airport.

@jpkay here again with one of the places surely not to miss whilst on the 🇫🇴: Sørvágsvatn and the cliff of Trælanipa, towering 132m above sea level. #visitfaroeislands #faroeislands

This is another one of those ‘out of this world’ kind of views that you could only dream up, except it’s real. From the ocean, there is a sheer 100m cliff leading straight up and sitting on top of that is a jaw-dropping lake. Being the largest cliff lake on the Faroe Islands, this place is relatively easy to find, although it does require a 1 to 1.5-hour hike from where you park your car. The hike isn’t that demanding and the rewards are well worth it.

Dragarnir is the collective name for two incredible sea stacks the islet Tindhólmur and Vágar. It is one of the most picturesque spots the Faroe Islands have to offer. The hike to get here is only 3-4km however, there isn’t a very well-established path along the way and the terrain can be fairly rugged. Because of the challenging terrain, you should allow a couple of hours to get there.