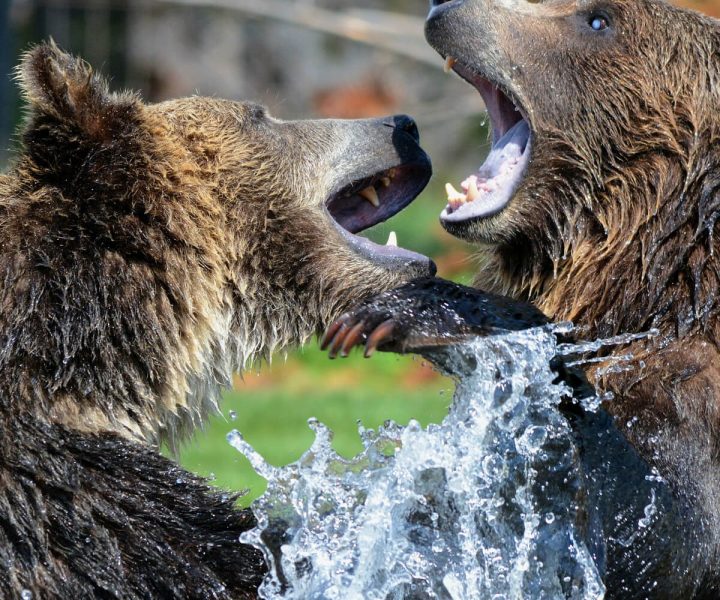 Anyone that spends time in the backcountry is almost inevitably going to run into a bear at some point. Typically, bears tend to shy away from people, and they are not prone to attack.

If a bear does attack you, chances are, you have startled them, or the bear is starving. Disturbing a bear can lead to fatal consequences, so if you’re ever unlucky enough to find yourself in this circumstance, here are some strategies that may help.

Bear attacks are not common

Fatal bear attacks are not frequent; on average there are 2.56 deadly bear attacks per year in North America, so the possibility of not surviving a bear attack is very low. However, climate change, habitat loss, and food shortages have increased the number of bear attacks in the past few years, so it’s always better to be armed with the knowledge of how best to survive bear attacks.

A bear’s behavior is influenced by biology and upbringing, so the likelihood of attack will depend on the type of bear you encounter. For example, black bears are relatively docile and skittish around humans, while polar bears are very aggressive.

According to the Alaska Interagency Bear Safety Education Committee, when faced with a bear, you should establish whether the bear is acting defensively or offensively, as this will be your guide on how to respond.

A defensive bear will attack when you’ve surprised it, or accidentally stumbled upon it. Most of the time, the bear will run off, but it can strike you if it sees you as a danger. Since you will have very little time to defend yourself, the best thing to do is drop to the ground, placing your arms and hands around your head and neck as a barrier. You should then play dead until the bear leaves. Remember that bears can come back, so stay in that position for at least fifteen minutes, until you’re sure the bear won’t return.

An offensive bear is one that is on the prowl and will move towards you when they spot you from afar. If you sense a bear is stalking you, slowly turn around and start walking back the way you came, aiming to put a safe distance between you and the bear. Once you can’t see it anymore, stay set for around thirty minutes, before changing direction away from the bear.

Never start running when you see a bear, as they may see you as a threat and start running after you. Whenever a bear is close, slowly move your arms and talk in a monotone voice while slowly backing away. Avoid direct eye contact, and use your bear spray to put a cloud between yourself and the bear.

The possibility of bear attacks shouldn’t keep you from enjoying what you love, so just make sure to pack your bear spray and use your common sense!