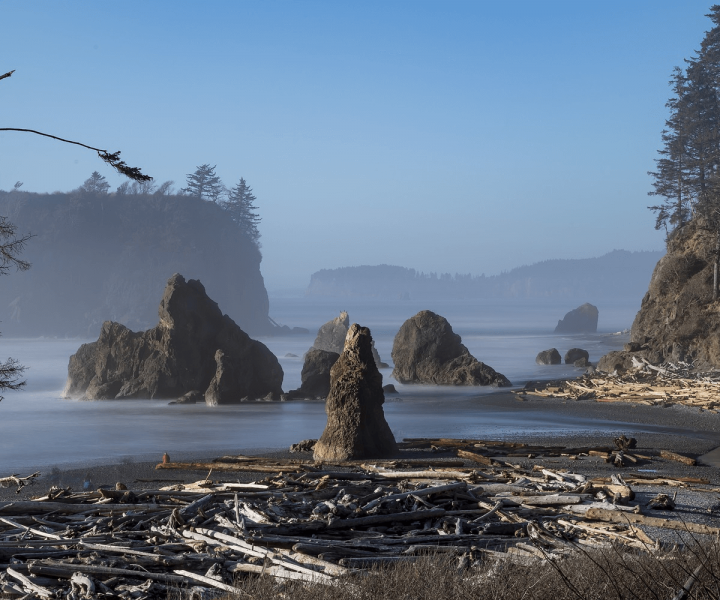 The 15 miles of beachfront property that make up this North Coast route hike, spanning from Shi Shi Beach to Cape Alava in Olympic National Park, Washington are amongst the most incredible miles of trail in the whole of the U.S. national park system.

Pristine white-sand beaches in the world have their place and time, such as enjoying some tropical sun while swinging in a hammock enjoying a drink with an umbrella. However, when it comes to hiking, we prefer our treks to be rugged, wild and perhaps even with a chance or rain.

You could have the trip of a lifetime by parachuting anywhere along the 73 miles of Coastline of Olympic National Park, but the very northern tip of the beach gets our recommendation. There is where, after some gritty climbing, you’ll find the oasis that is Shi Shi Beach, with its breathtaking sea-sculpted rocks.

Start at the Shi Shi Beach Trail surrounded by a Western hemlock and Sitka spruce forest, and trudge down a 50-foot bluff to end up on Shi Shi beach, where you’ll find a population of hermit crabs, tide pools brimming with starfish, cone-shaped sea stacks and wide sand paths.

At the southern boundary of Shi Shi Beach, you’ll find a parade a mile long filled with boulders, pinnacles, and perilously balanced sea arches. Continue for two miles to experience the Pacific Ocean swallowing the beach at several capes, especially during high tide. For crossing these two miles, make sure you have a tide table, and go around them only during the ebbing tide.

At around mile 7, you’ll come across the last crossing, where the route widens, and the next four miles are sandy paths scattered with driftwood ending by the Ozette River. You need low tide to cross this shin-deep ford, as it swells to impassable heights during high tide. When you’ve managed to pass, keep going for two more miles until reaching Cape Alava.

If trekking the whole 30 miles at once isn’t on the cards, you can camp at seven designated sites. You need to make your reservation in advance between May 1st and September 31st.