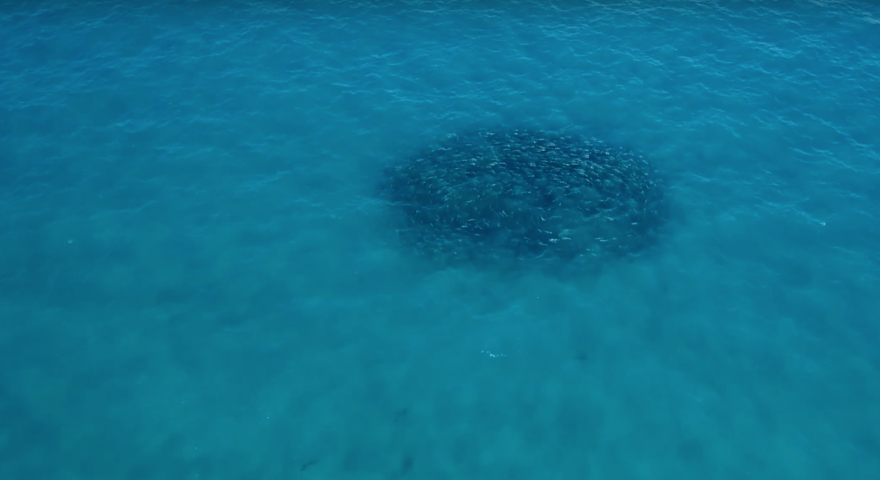 When Joshua Jorgensen, the founder of BlacktipH Fishing show based in Palm Beach Gardens Florida heard that “the sharks were going crazy,” he did exactly what is expected of the produced or a popular online fishing show. Jorgensen ran to the beach with his drone and began filming.

As he started shooting, he quickly found a huge school of fish. In the video, he states “As I flew my drone closer to the school I noticed these were huge bluefish. This is not usual in Florida. Typically our bluefish are very small. These are northern-sized bluefish, 10-pound-plus fish—huge for Florida.”

The reason the blacktip sharks were going crazy was that they were having a field day, enjoying a massive meal of big bluefish.

“Once a blacktip grabbed a bluefish, all the surrounding sharks charged in and tried to get a piece,” Jorgensen said. “It was literally a ball of sharks. Every minute that went by there were several dozens more blacks showing up feeding on the bluefish.

“Within 30 minutes there were hundreds and hundreds of blacktips feeding on the bluefish. The bluefish were forced to break away from their position and literally fled as fast as they could away from the sharks,” Jorgensen said.

Blacktip sharks are often confused for spinner sharks, as they are prone to leap out of the water and spin three or four times. They migrate yearly along the Florida coastline in big numbers.

The epic footage shows the blacktip sharks going crazy on the surface and showing off their signature spinning moves. “This is probably the coolest fishing I’ve ever done in my life,” Joshua Jorgensen said at the time. “Our mission was to film the sharks attacking the plugs; I didn’t want to waste any time fighting the sharks.”

“This was by far one of the most exciting fishing experiences of my life.”

Lucky for us, both experiences were captured on video.