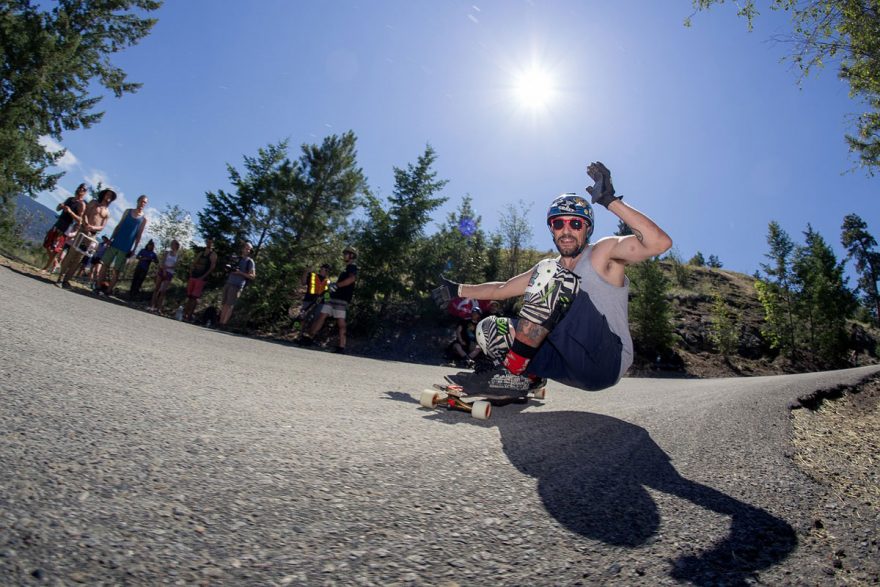 In case you’re unfamiliar with the sport, downhill longboarding is an evolved form of skateboarding in which speed is the focus, rather than style and tricks. The idea is that you take your longboard to an open downhill road, sometimes standing up, sitting or lying down, and go as fast as you can.

Due to the nature of the sport, injuries are commonplace and it normally requires you wearing safety equipment such as a helmet, gloves, and padding. In order to gain control over speed and movement, braking and sliding techniques are used. This can involve a hand going down to increase drag or dragging your foot behind you to slow you down.

Sound terrifying? Well, how about you add a ‘no hands allowed’ rule into the mix and you’ve got yourself a sport we’d rather stay well clear of but happily watch from the sidelines. The Red Bull No Paws Down was a hair-raising event involving 72 competitors hurtling downhill at speeds upwards of 50mph.

In order to judge whether hands hand been used or not, duct tape was put on everyone’s palms. If it showed signs of sliding or braking, you’re out. Longboarder Rob McWhinnie explained the rules as “the first two riders to reach the bottom advance into the next round and if the duck tape on your palms shows any signs of sliding with your hand, you’re out!” Simple.

The event took place in Osilnica, Slovenia and according to the Free Rides site, the race format went as follows:

– Full-face helmet & slide gloves mandatory, pads recommended
– Pucks are marked with tape, checked at the end of the run
– Using pucks disqualifies the rider; 1st to do so = 4th, 2nd to do so = 3rd
– At the rider’s risk, the use of elbows, knees, heads are allowed to stay on board
– In case of rain, the race goes on