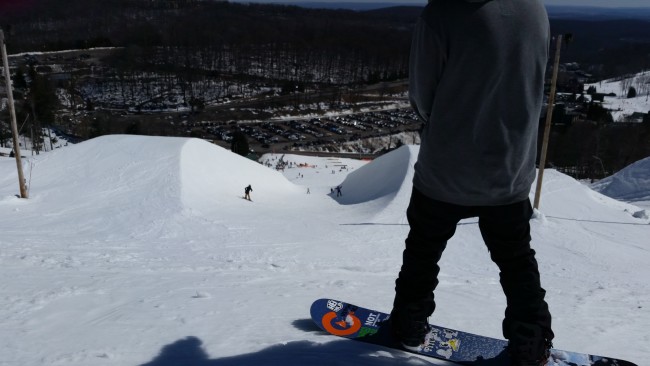 It’s 55 and sunny, a perfect spring day the weekend of February 28 and Seven Springs is finally able to open up their superpipe for whatever is left of the winter that never was.

I’ve made my way down to Pennsylvania for a change of scenery, and the road trip that began at Blue Knob a few days before is wrapping up at Springs where I’m meeting

up with Nate from Shred Soles and his buddy Paul from Custom Cult Snowboards, both seasoned riders whose version of Sunday Mass is lapping the superpipe at Springs.

They’re chomping at the bit, waiting for a competition to finish up before the pipe is open to the public. Over a few parking lot beers and bananas, Nate keeps ribbing me: “You brought your superpipe legs today, right?”

I’ll go check it out, I tell them. I figure I’ll post up on the deck and take some pictures, but have no real plans on riding it.

So, some context: Before I went to Seven Springs, I had accepted that I would never ride a superpipe, and I made all sorts of excuses for why this didn’t bother me: but mainly the fact that there aren’t any pipes within 5 hours’ drive of me means it’s simply not a skill I can develop. And pushing 36 years old, I’m sure not getting any younger.

My one previous superpipe experience, if you could call it that, was at the Otsego Club’s O-Park. Let me tell you about that vertigo you get when you’re staring straight down an icy wall on an overcast day, and probably also really hungover, and you’ve just watched a friend embarrass himself dropping in…

Fast forward to 2016 and it’s been five or six years since I even entertained the thought of riding anything bigger than a hand-dug stunt ditch and here we are at Seven Springs staring down the barrel of their 22-foot superpipe.

It’s pretty massive, but it doesn’t look as big as it did yesterday. It’s been baking in the sun all morning so the backside wall should be soft and slushy, what have I got to lose? I watch Paul first, and then Nate, as they take their first run through the pipe this season. Without surprisingly little trepidation (peer pressure is a powerful drug!), I follow Nate’s line, dropping in a bit lower on the backside wall.

Before I know it I’m through the flat bottom and make that first schralping arc up the icy frontside wall and back down.

Like Jonah and the whale, the superpipe has pretty much swallowed me; all I can see in any direction is snow and ice and now the backside wall is fast approaching. I have literally no idea what I’m doing, it feels all sorts of weird and confusing and disorienting, but up and back around again, and again, and again. I make it through.

We hit the chair and go back for more. The second run is still awkward, but less so. I’m probably making my turns on the wall around the 18-foot mark. It still doesn’t feel natural but it’s something I can work with. By the third lap, there’s no hesitation before I drop in, though I can tell I am holding back.

Building confidence and working out the mechanics after a few more runs, I stay stacked on the board, attack instead of just react. By the fifth or sixth lap through I’m still not airing out but decide to do something. I land a little low and tail-heavy for the backside alley-oop 180, washing out to the bottom, but I’m able to salvage another one, before surf-slashing the bottom of the frontside wall.

A couple hours in the sun, lapping the superpipe and my legs were fried, but I’d come away with a new appreciation for halfpipe riding, and I’m now actually looking forward to doing it again.  Nope, I didn’t boost a massive Danny Davis switch method, but going from a perfectly contented “I’ll never” to “That was so much damn fun, I can’t wait to do it again!” in the span of a few hours was honestly more than I expected.

We rounded out the day with a few more laps outside of the pipe, a few token laps through The Streets park, and a celebratory beer (or two) before we’re back on the road, 5+ hours to home.

So there ya have it, the day that I learned to stop worrying and love the superpipe. I’ll never “master” it, that I’m sure, but it’s a whole new discipline for me, even if I can only ride one a few times a year.