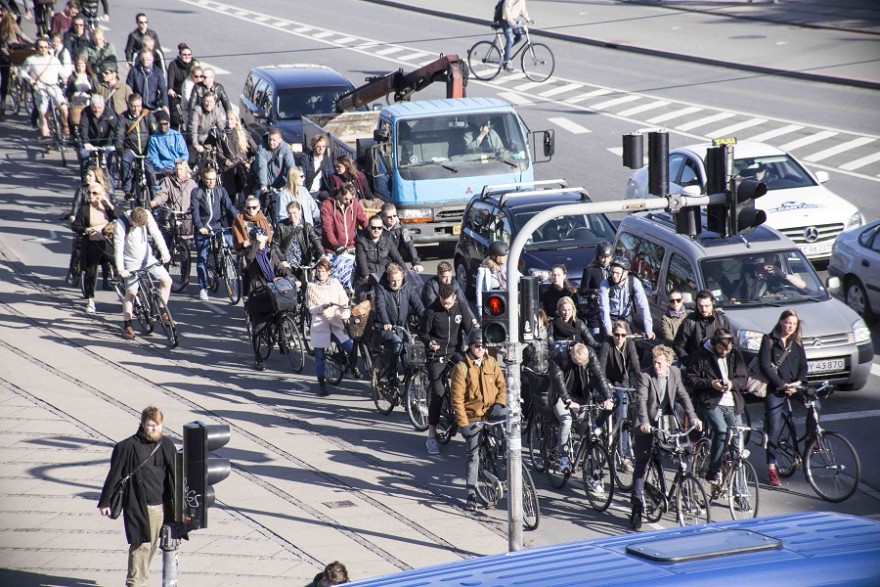 That’s according to the urban design consulting firm Copenhagenize Design Co., based in Copenhagen, Brussels, Amsterdam and Zurich.

The multinational company releases its Copenhagenize Index every two years to rank the most bike-friendly cities around the world.

What does it take to get a top spot?

“You need serious advocacy, bike facilities, social acceptance, and a general perception that cycling is safe,” wrote Copenhagenize CEO Mikael Colville-Anderson in a Wired piece unveiling the list. “You get extra points for a higher modal percentage—the share of residents who get around by bike as opposed to car or public transit—and for a 50-50 gender split among cyclists. Of course, infrastructure is key.”

Copenhagen topped Amsterdam which had been the best city in the world in 2011 and 2013.  Dublin and Montreal both fell in the standings while Minneapolis was the lone U.S. city named. New York, Portland and San Francisco had been on the Top 20 list previously.

According to the firm, the Danish capital remains impressively consistent in its investment in cycling as transport and in making efforts to push it to the next level. With regards to a uniform network of urban design for bicycles, Copenhagen is unrivaled in the world.

In Scandinavia, Copenhagen is “light years ahead of every other city.”

“Only Malmo, across the water, comes close to measuring up to Copenhagen, maintaining their place in the Top 20,” the list found. “Only Helsinki fares respectably, with a Top 30 finish, while Stockholm, Gothenburg, Oslo and the Baltic capitals float about mid-table.”

Minneapolis was noted for its “on-street bikeways” and “political will coming out of City Hall.”

“A respectable bike share system is helping to cement the bicycle on the transport foundation of the city. Seeds have been planted and a garden is growing. America —often content with baby steps—is in desperate need of leadership cities and Minneapolis has emerged as a contender,” the report shared.

It continues: “We know Minneapolis is proud of their winter and we love that an American winter city is the one who makes the Top 20. Better infrastructure maintenance during the winter is key. Prioritize snow clearance on the bike infrastructure above all else. What will help the city, however, is to stop talking about the winter and to focus on getting a massive rise in ridership during the rest of the year. Minneapolis would do well to increase their commitment to protected infrastructure and to focus on making the continent’s best on-street network —and the first city to NOT feature sharrows. It’s hard for American cities to think out of the box regarding transport, but somebody has to do it. Why not Minneapolis.”

The U.S. does have promise. The BIg Apple, Portland, San Francisco, Austin, Philadelphia, Washington, D.C. and Chicago are in the Top 40.

Montreal, says the report, has long been the best North American city for cycling. Making it a top city includes its protected bike lanes, bike share system and strong advocacy.

According to the study,” In the surrounding region, Montréal rises above cities like Ottawa, Toronto and Boston. Only the Canadian capital seems intent on giving them a run for their money, while farther afield, Vancouver is drumming up some hype without being able to convert it into ridership. Montréal is a global city so cities like New York City and Paris should be their yardstick for comparison—and they are keeping up with those Joneses for now.”

Copenhagenize advises “cites and governments in how to work towards a more bicycle-friendly urban landscape.”