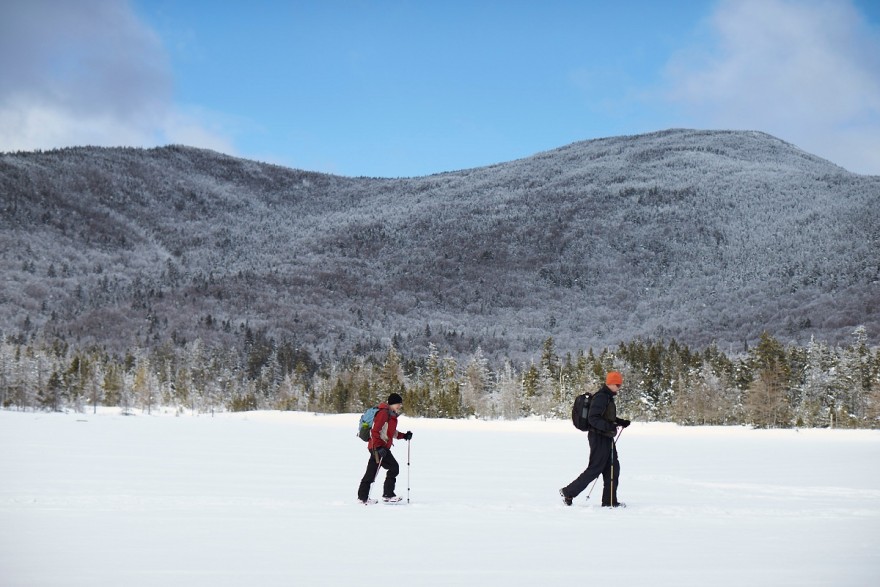 With New England hammered by snow, the time is right to explore by snowshoe. Whether breaking trail following a storm or waiting a bit to let others pack the way, lightweight metal snowshoes with traction aids underfoot have replaced the wooden tennis racquet style of yesterday which tend to hold court above lodge fireplaces these days.

So where to go?

Ramble along the forests, meadows and hills of the 200-plus acre Pratt Nature Center in New Milford. The small two-mile trail network has some seven trails making it a nice spot for the family or those trying snowshoeing for the first time. The winding East Aspetuck River wiggles through the woodlands. The trails aren’t all flat so expect some gradual hills. The center also offers programs through the year.

Peary Mountain in Brownfield is only 958 feet high, but serves up vistas rivaled by some big peaks. The mountain bears the name of one of Maine’s most famous explorers — Admiral Robert Peary. Peary, who grew up in many Maine towns, discovered the North Pole in April, 1909. He lived with his widowed mother in nearby Fryeburg for two years upon graduating from Bowdoin College in 1877. The woods and mountains called to Peary, and he answered by becoming an accomplished taxidermist and civil engineer. The gentle pathway to the top is two miles round-trip along a snowmobile trail.

Mount Toby near Sutherland is a place to get schooled. The 1,239-foot top mountain with fire tower affords birds eye views over the Connecticut River Valley. The mountain and neighboring Holyoke Range are prime spots  for a snowy outing. Oval-shaped Mount Toby, with its 25-mile network of hiking and cross-country ski trails, is also a working outdoor laboratory. The University of Massachusetts at Amherst oversees the 755-acre Mount Toby Demonstration Forest as students use the area for field and forestry research and teaching. But there’s also something poetic about Mount Toby, as the 47-mile long Robert Frost Trail passes over it as it crosses through 10 towns on state and private lands between South Hadley and Wendell.  The moderate 3-mile roundtrip along the Robert Frost Trail is the way to go.

Lonesome Lake in Franconia Notch State Park is a stunning spot. The lake sits in a basin under the twin peaks of 4,293 foot North Kinsman and the 4,358 foot South Kinsman. But the prize in this jaunt is the dazzling beauty of the Franconia Ridge. The snow-choked ravines are like fingers between the crusty ridges. During a day of sunshine, the combination of the wind-drifted snow on the frozen lake, the Kinsman pair and the Franconias are like a perfectly executed oil painting. The moderate 3.2-mile trek also leads to the Appalachian Mountain Club’s Lonesome Lake Hut which is open in winter for those who want to turn a day trip into an overnight.

The 860-acre George B. Parker Woodland in Coventry is a land of  old growth forest, brooks, hills, natural and manmade notable landmarks and fields. he Audubon of Rhode Island property is easy to get around with its well-signed orange, blue and yellow trails (some former carriage roads) over the oxbow-like seven miles of trails. The property is a wonderful retreat and depending on the amount of snow, keep an eye out for all the cairns along the Paul Cook Memorial Trail. Tall, short, funky. Why are they there? The origins are iffy. Could be the Narragansett people, the Celts or early colonial farmers. To early farmers, stones were a pain because they had to be removed before they could plow the fields. But crafty as they were, they used those stones to build rock walls.

From the top of Mount Tom‘s south peak in winter is a splendid panorama of central Vermont and the upper Connecticut River Valley into New Hampshire. Even from a wooden semi-circular bench by Woodstock’s illuminating Christmas star, the quaintness that is Woodstock can still be seen. Mountains, hills and neat farms are off in the distance. Down below, like a miniature town from a childhood railroad display, Woodstock is alive. Smoke rises from the wood stoves and fireplaces. The Ottauquechee River cuts its path through town. The Federal style and immaculate homes which line the village green appear diminutive. Even the covered bridge in town can be spotted during this 3.6-mile roundtrip hike along the Faulkner Trail.

Image by Dennis Welsh, courtesy of the Appalachian Mountain Club