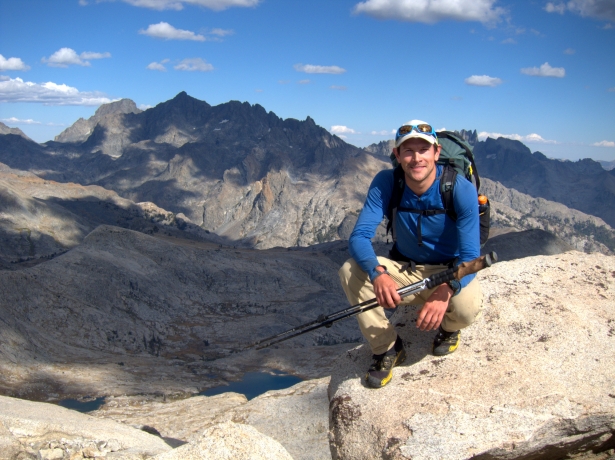 Andrew Skurka, National Geographic Adventure’s 2007 Adventurer of the Year, and hiker of many thousand miles, is unphased by gear.

He knows enough about gear to write a 224-page book about it. Skurka is constantly updating his website with tips for how to make and use new gear, and has a broad understanding of what’s truly necessary for a backpacking trip. But he doesn’t come off as being particularly interested in it.

“It’s probably kind of ironic I wrote book about gear but I’m not mesmerized by it,” he said. He’s weeded out the excessive pieces over the years, and now his packs won’t get heavier than 30 pounds.

His hiking started with day trips near where he grew up, in Massachusetts. He then went on to work at a summer camp in North Carolina where he began to get more into hiking. He’s come a long way since then—literally. On November 7, 2007, he became the only person to complete the Great Western Loop, 208 days and 6,785 miles after he began. Ten years ago, he completed the sea-to-sea hike, a 7,700 mile trek from Quebec to Washington that took him 11 months. His other biggest feat was a 4,720 mile Alaska-Yukon Expedition. He’s been some places.

The three big hikes are what he’s known for, and also what he considers to be the most memorable. “The others don’t even get honorable mention,” he said. He’s done dozens of smaller trips over the years, but the months of thousands of miles top them all. “Those three bigs trips,” he said, “They’re well beyond any one week type trip that I did, those are like ‘training wheel’ hikes.”

Skurka hiking through the Chugach Mountains in Alaska.

But it took those training wheel hikes to get him through the end of the big wheel hikes. Each trip acted as preparation for the next. As he got older, the hikes became more and more aggressive and ambitious. The sea-to-sea trek was the first big one for him, and he said that when he did it he was in no place to pull off the Great Western Loop, “I didn’t have the skills or maturity,” he said.

It’s been a progression for him, and now for the future that he can see, he’s done with bigger trips. He’s married now, has a home, and a career, and isn’t in the current place to do bigger expeditions like he has before, “There’s not an interest or flexibility,” he said.

Switching from thousands of miles solo to 20 with a group was a big change for Skurka, and the biggest difference was that his level of proficiency while teaching had to be, “through the roof, better,” he said. “Just because someone is good at something doesn’t mean they’re great teachers, it’s a totally different art,” Skurka said.

His trips are a totally different art than the backpacking that he has done, as well. “The trips that I guide tend to be far less hardcore,” he said. “They have a much greater emphasis on having pure fun instead of being very objective driven.”

For Skurka, the most difficult part of guiding trips is the weight and responsibility. At the end of the day, he can have 10 people looking to him for safety. “I have to basically be the thing that keeps them out of harms way in an environment where they don’t belong on their own,” Skurka said. All of his trips are highly educational, teaching skills that will be useful on future trips of their own. “I’m the vehicle for them to have more ambitious trip than they can have on their own.”

The trip also includes help with preparation, something that Skurka has pointed out as being as important as the trip itself. With that comes the gear, what to bring, what to leave at home, and how to decide how to purchase a piece of gear. Skurka learned about gear first because he knew he needed a functional understanding of gear, and how it could help him in the field.

“Gear allows me to do better things outdoors,” Skurka said. For others who are interested in learning about how to best spend their money on gear he recommended a book. “I’m actually not kidding,” he said. “If you have $100 to spend on equipment, I would say go buy my book for $13 dollars on Amazon and it will save you thousands.”

Within the mindset of buying one thing that lasts, he recommends buying gear that is multipurpose, and instead of purchasing a few things for different scenarios, always buy the product that is for the most extreme conditions. When you can splurge for a few nicer items, Skurka said that going for a down option instead of synthetic is always the best choice, and will last the longest.

The most important—and underestimated—piece of gear that Skurka recommends is free. “Bring your brain,” he said. There’s no top 10 list that he can say is definitive for every trip—it differs with the conditions, the hiker, the terrain, and other factors each time. There’s no surprise piece of gear that’s going to save a hiker, no secret to the art of thru-hiking. “When I’m out there I make a good effort to make good decisions,” he explained. “Bring your brain, make good decisions, know your limits, understand risk, and prepare.”